Skip to Content
Home » Outreach » Courts in the Community

Courts in the Community 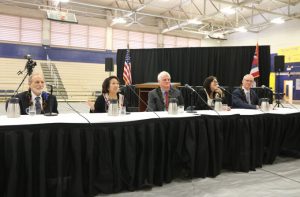 Under the Courts in the Community program, the full, five-member court travels to Hawaii high schools to hear oral argument in an actual case.

The event begins with remarks welcoming the audience and explaining the format of the proceedings. The court will hear one oral argument during the visit. At the conclusion of the argument, the justices depart the room so that the students may discuss the case with the participating lawyers. The lawyers leave the room at the end of their session and the justices return to answer non-case related questions from the students. A luncheon with the students and members of the bar usually wraps up the activities. The entire visit generally lasts about four to five hours.

Prior to the court convening on a campus, students have the opportunity to learn about the judicial system and the appellate process using a curriculum developed by the Kamehameha V Judiciary History Center and the Students for Public Outreach and Civic Education of the University of Hawaii’s William S. Richardson School of Law. The students also participate in a moot court exercise involving the actual case that will be argued when the court comes to campus. The Hawaii State Bar Association has been providing financial support for students participating in the program. The moot court activity is facilitated by volunteer lawyers or law school students.

Next Courts in the Community Event via Zoom

In the Matter of HAWAIIAN ELECTRIC COMPANY, INC. For Waiver of the Na Pua Makani Wind Project from the Framework for Competitive Bidding, and Approval of the Power Purchase Agreement for Renewable As-Available Energy with Na Pua Makani Power Partners, LLC.

The above-captioned case has been set for argument on the merits at:

The oral argument will be held remotely and will be live streamed for public viewing via the Judiciary’s YouTube channel at YouTube.com/hawaiicourts.

Courts in the Community Video