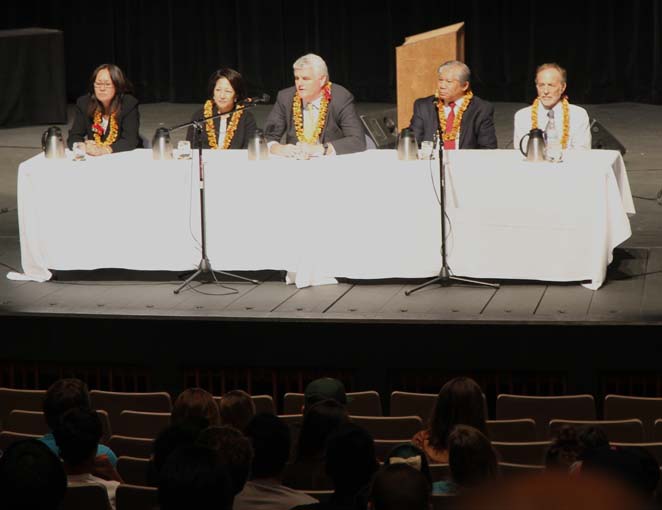 It is believed to be the first time that the Hawaii Supreme Court convened on the Big Island to hear a case. It was part of the Judiciary’s Courts in the Community outreach program, which helps educate students and the general public about the Judiciary’s role in government and its function in resolving disputes in a democratic society.

The court heard oral arguments in Collins v. Wassel. The oral argument was followed by two separate question-and-answer sessions for the students; one with the attorneys and another with the five justices.

“Our hope is that we can help give our younger generation a window into the role and processes of the state Judiciary,” said Chief Justice Recktenwald. “We wanted to give students an opportunity to go beyond the textbooks and experience a Supreme Court oral argument in person. We thank all the teachers for their time, commitment, and partnership in making this possible.”

To prepare for the oral argument, the participating juniors and seniors from each high school studied a curriculum developed by the Kamehameha V Judiciary History Center and the Students for Public Outreach and Civic Education of the University of Hawaii’s William S. Richardson School of Law. The students’ study was followed by a moot court activity facilitated by members of the Hawaii County Bar Association.

The Hawaii State Bar Association generously provided the students with lunches and transportation to and from UH Hilo.