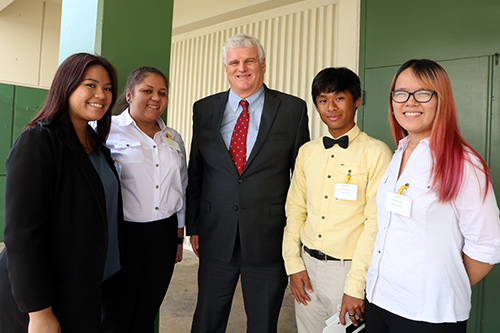 The court heard oral arguments in the case of State of Hawaii v. James Weldon. The case is a criminal matter involving a man who was arrested and charged with carrying a deadly weapon. The issue is whether the police had reasonable suspicion to believe that the man was committing a crime when they initially approached and questioned him.

The hearing was followed by two separate question-and-answer sessions for the students – one with the attorneys and another with the five justices.

To prepare for the case, the high school students worked through a curriculum developed by the Kamehameha V Judiciary History Center and the Students for Public Outreach and Civic Education of the University of Hawaii William S. Richardson School of Law. Attorneys from the Hawaii State Bar Association (HSBA) also volunteered their time and facilitated the moot court activity in the participating classrooms, where the students argued the case themselves.

“The Courts in the Community Program is both civic education and civic engagement,” said Chief Justice Mark E. Recktenwald. “This program not only provides a great opportunity for the students to see the Hawaii Supreme Court in action, but it also provides a special opportunity for the justices to interact with some of Hawaii’s future leaders.”

“We deeply appreciate the support of the participating schools, the William S. Richardson School of Law, the Hawaii State Bar Association, and the attorneys who volunteer their time. We had 69 attorneys, a record number, volunteer to prepare the students for the event,” he said.

“This was the first time the Supreme Court has convened at Kaimuki High School. The attorneys were impressed with the students’ participation and enthusiasm,” said HSBA President Howard Luke. “We received very positive feedback which reflects the importance of the Courts in the Community Program and its overall impact.”

“We would like to thank everyone who made this day possible, the Hawaii Supreme Court, volunteer attorneys, teachers, school administrators, and the students,” Luke added.

If you have any questions or would like to request additional photos of the event, please contact Deborah Murray at the Hawaii State Judiciary Communications and Community Relations Office at (808) 539-4909.