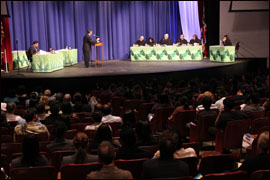 The first Courts in the Community Program was held at Farrington High School in 2012.

The first oral argument under the Courts in the Community program held on Oahu at Farrington High School in February 2012, with participants coming from Farrington and Mililani High Schools.

After the oral argument, there was a question-and-answer session with the participating lawyers. At the conclusion of the session with the lawyers, the members of the court met with students to answer questions about the judiciary and the appellate system, and then joined them for lunch.

The response from students and faculty who attended was incredibly positive. Students were amazed that some of the questions that were asked by the justices during oral argument had come up during their own moot court exercises. They were able to understand the process in a way that would not have been possible by listening to a lecture. Several students said that the experience had inspired them to consider a career in law.

In December 2012, the Courts in the Community program went to Baldwin High School in Wailuku, Maui. It is believed to be the first supreme court oral argument on Maui in about 150 years, and almost 500 students from seven different schools attended the program. The Maui County Bar Association supported the event in many ways, most notably by volunteering to meet with students to ensure that they understood the legal process and the actual case that was argued before the court. Again, the response from the students, teachers, and the County Bar was extremely positive.

Because it has proven to be a significant learning opportunity, the Judiciary is looking forward to bringing the program to the island of Hawaii this coming school year.