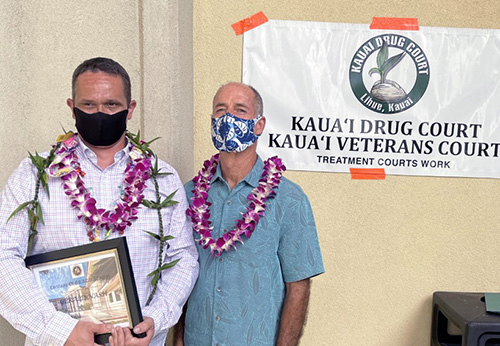 In what Fifth Circuit District Court Judge Michael K. Soong described as “a major turning point in your lives,” the latest graduating class of the Kauai Drug and Veterans Courts could be seen smiling proudly behind their masks during the December 1 ceremony.

Since its inception in 2003, the Kauai Drug Court has graduated 245 individuals. The Kauai Veterans Court, which began in 2017, now has two graduates.

Garden Island reporter Jason Blasco covered the event via Zoom, noting in his story that guest speaker Kauai Mayor Derek Kawakami shared with the graduates his own struggles with alcohol addiction. He told them that he was now 630-plus days sober.

Drug Court is a program designed to address crimes related to substance abuse and provide alternatives to incarceration, while saving taxpayer dollars.

They deal with many of the most troubled, most addicted offenders on court-ordered supervision. These offenders are the ones most in need of drug court services and the state gets a better cost-benefit return by helping them avoid incarceration and become employed, drug-free, law-abiding citizens.

The program is 18 months long. It is an intensive court-based outpatient substance abuse treatment program with mental health and medical follow-up, frequent and random drug and alcohol testing, assistance with obtaining employment and housing, random home visits, strict curfew monitoring, frequent review hearings before the Drug Court judge, along with incentives for clients who maintain sobriety and either attend school or training, or are gainfully employed.