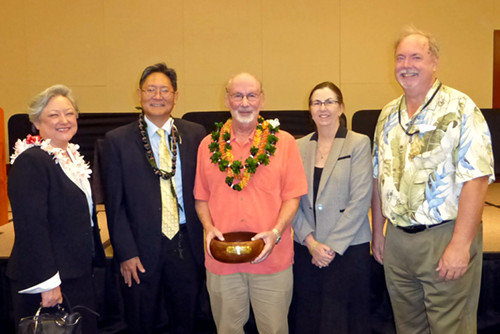 The Ki’e Ki’e Award recognizes an attorney for outstanding provision of professional legal services at no charge to the recipient.

Judge Foley, in an interview in 2013, said, “So, in my 26 years as a lawyer, I did a lot of pro bono, and I don’t regret one hour. Some of my greatest successes and satisfaction came from those pro bono cases. It’s many of those cases I most remember and treasure when I look back at my career as a lawyer.”

Judge Foley’s ICA colleagues, Chief Judge Craig Nakamura and Judges Alexa Fujise, Katherine Leonard, Lawrence Reifurth, and Lisa Ginoza, supported his nomination and were in attendance at the award ceremony. As recognized by all, Judge Foley has not sought the limelight during his career, but quietly and studiously contributed to the betterment of the community. He loves the law and exemplifies the highest ideals of the profession.

Judge Foley has served in many pro bono and community service capacities, including:
serving as a Peace Corps volunteer in the Kingdom of Lesotho in southern Africa; working in Micronesia, assisting legislative bodies; pro bono service as an Associate Justice of the Supreme Court of the western Pacific Ocean’s Republic of Palau; serving as the first Director of the American Civil Liberties Union in Hawaii; working with Save Sandy Beach, and serving as a member, and as the Chairperson, of the Access to Justice Commission from 2010 through 2015.

After his retirement, Judge Foley will continue to serve, pro bono, as an Associate Justice in Palau.