Kauri Pine Being Removed This Week 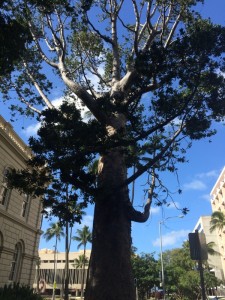 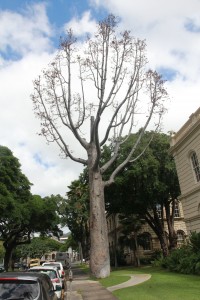 There is a beautiful Kauri Pine on the Mililani Street side of Ali`iolani Hale that has been part of the Judiciary ‘ohana for about a century. It has remained a constant feature of natural beauty in the ever-changing downtown Honolulu area.

Unfortunately, the Kauri Pine was observed to be in decline with dead branches identified in the tree crown in July 2015, and has since continued to deteriorate.

During a safety pruning of the tree in January 2016, ground termites were found in the upper reaches of the tree and much of the central trunk was found to be hollow.

The pruning of the Kauri tree was conducted under the direction of licensed arborist, as is required for Honolulu’s Exceptional Trees. The arborist, who is on the Exceptional Tree Commission, directed a landscaping company in removing enough of the high risk dead branches to ensure that what remains is safe for the time being.

Following the arborist’s examination of the tree and branches, it was determined that the quick decline in tree health indicated little to no possibility for recovery. It was therefore recommended that the tree be removed as soon as possible, and the arborist noted that the situation was considered to be a high priority.

The removal has been scheduled for Thursday, June 2, and Friday, June 3, from 7:00 a.m. to 4:00 p.m. During this time, both directions of Mililani Street will be closed.