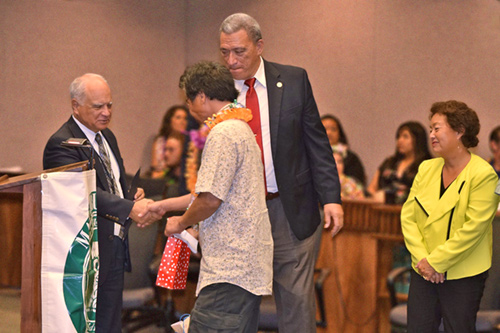 Second Circuit Chief Judge Joseph Cardoza (left) is joined by Judge Richard Bissen (center) and Judge Rhonda Loo (right) in congratulating one of the Maui/Molokai Drug Court’s 17 graduates at the November 9 graduation ceremony. The court also celebrated a milestone by commemorating the success of the 607 individuals who have completed the program since it began in 2000.

WAILUKU, HI – There was much to celebrate at the Maui/Molokai Drug Court’s 61st Graduation Ceremony on November 9. With 17 participants completing the final steps of their intensive court-based treatment, the program achieved a milestone: more than 600 successful graduates since the court first convened in 2000. This was the third largest graduating class in the program’s 17-year history.

More than 80 people attended the ceremony to show their support for the graduates.

“Today we celebrate not only the life-changing successes of our graduates, but also the benefits gained by their children and families, whose lives will be improved significantly because of the choices our graduates have made,” said Second Circuit Chief Judge Joseph Cardoza.

Judge Cardoza, who has served as one of the presiding judges of the Maui/Molokai Drug Court since 2000, recalled, “When our Drug Court was in its infant stages, the participants organized a Christmas party for their families. As I walked in and saw the 264 children in attendance, I was overwhelmed. At that moment it became crystal clear to me that the help we provide adult participants in Drug Court has a direct impact on the lives of their children, the next generation of our community.”

The Maui/Molokai Drug Court is an intensive outpatient substance abuse treatment program for justice-involved adults, established by the Judiciary in order to address community problems stemming from substance abuse, while minimizing the societal costs of drug-related crimes, and protecting the community.

“We now have more than 25 years of exhaustive scientific research that consistently shows beyond a reasonable doubt that drug courts give you a better result for less cost,” said Chief Judge Cardoza. “Across the nation, studies find that drug courts produce significant reductions in both drug relapse and criminal behavior, leading to significantly fewer crimes, re-arrests, and days incarcerated. All of this results in cost savings to the community.”

The program currently serves 127 adult clients (123 on Maui and 4 on Molokai). As an alternative to incarceration, Drug Court helps ease both overcrowding in Hawaii’s jails and prisons, and reduces the impact of incarceration on the children and extended family members of the program’s participants.

“It costs $6.65 per day each year to treat and supervise a drug court client, while the cost of incarcerating an inmate in Hawaii is $140 per day,” noted Dean J. Ishihara, LSW ACSW, Administrator of the Maui/Moloka’i Drug Court. “Statistics on Maui/Molokai Drug Court clients who complete their treatment and graduate from the program show that three years after graduation more than 85 percent are not convicted of any new felony offenses. This outcome is consistent with numerous studies, including findings from the National Institute of Justice, which show that, after graduation, drug court participants have less involvement in criminal activity, and significantly less use of illegal drugs or heavy use of alcohol.”

In January 2000, Hawaii Supreme Court Chief Justice Ronald T.Y. Moon signed a Supreme Court Order of Appointment creating a Drug Court Coordinating Committee to assist with planning, implementing, and improving drug courts throughout the State of Hawaii. Today, there are drug courts in each of the four judicial circuits. The Maui/Molokai Drug Court was established under the leadership of retired Chief Judge Shackley Raffetto in 2000.

Before graduating from the program, the Drug Court also ensures that participants have improved family relationships, reliable transportation, and have passed their General Educational Development (GED) High School Equivalency Test, or have attained their Competency-Based diploma. With its multidisciplinary approach, rehabilitation has been possible, as well as the restoration and reunification of families.

“The Maui/Molokai Drug Court Program’s success arises from the efforts of the entire community, including countless volunteers who provide clean and sober support for participants, community service and non-profit agencies, families, friends, employers, the Department of Education, University of Hawaii Maui College, Department of Human Services, the County of Maui, the Homeless Resource Centers, and numerous treatment service providers,” said Chief Judge Cardoza. “I’d like to extend a very special thanks to our Drug Court Team, which includes the Maui Department of the Prosecuting Attorney, Office of the Public Defender, Maui County attorneys, court and probation officers, the Maui County Police Department, Maui Community Correctional Center, and the Maui Office of the Hawaii Paroling Authority.

“The Maui Community Correctional Center has been instrumental in the Drug Court Program’s operation of two treatment dorms, one for men and one for women. These dorms offer 24/7 drug treatment and sober living for participants transitioning from the correctional setting to the community. The dorms provide essential treatment, and public safety during the critical transition period, a feature rarely found in the criminal justice system in the United States.”