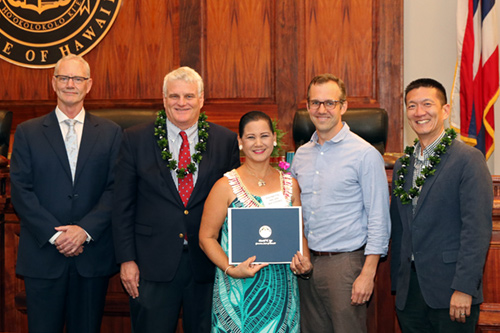 HONOLULU – In the last year, more than 1,200 people on Oahu were given legal advice by attorneys who volunteered their time to help those in need. Fifteen law firms and 48 attorneys were honored at the Hawaii Access to Justice Commission’s 2017 Pro Bono Celebration on October 26 in the Hawaii Supreme Court courtroom. Awards of $500 each were made to six high school students in the Commission’s 2017 essay and video contest.

Local legal services providers nominated their awardees. The awardees and the organizations honoring them are:

Other volunteer attorneys, law firms, and non-profit organizations were recognized for their pro bono service at the Honolulu District Court and the Kapolei Family Court Access to Justice Rooms in 2017. They are:

In addition to the acknowledgment of the volunteer attorneys, the award recipients from the Access to Justice Commission’s 2017 statewide high school essay contest were praised for their work. 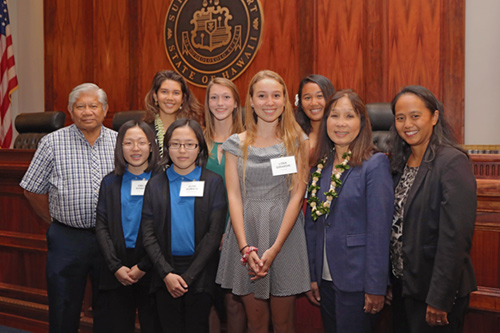 This is the fifth year in a row that the Hawaii Access to Justice Commission has sponsored the contest to encourage and recognize student volunteerism, and the very first time students were invited to submit videos as well as written essays.

“Our judicial system exists to provide equal justice for all. Hawaii ranks third in the nation for our efforts to increase access to the courts, and we continue to pursue improvements in this area,” said Justice Simeon Acoba (ret.), who serves as the Chair of the Hawaii Access to Justice Commission. “The annual Pro Bono Awards is a celebration of Hawaii’s ongoing efforts to realize justice for everyone in our communities. We cultivate the commitment to this ideal by encouraging thoughtful essays and videos by students about the virtue of volunteering, and by recognizing lawyers who voluntarily donate their legal services to those in need.”

The Hawaii Access to Justice Commission was created in May 2008. The Commission’s primary purpose is to substantially increase access to justice in civil legal matters for low- and moderate-income residents of Hawaii. Information about the Commission may be obtained at http://www.hawaiijustice.org/hawaii-access-to-justice-commission.

The Hawaii State Bar Association is the unified bar association for all persons admitted to the practice of law in Hawaii, and serves to unite and inspire Hawaii lawyers to promote justice, serve the public, and improve the legal profession.