Judiciary systems including JEFS, eCourt Kokua, and Document Drop-off will be unavailable due to maintenance work beginning midnight Friday, September 23, to noon, Sunday, September 25. If work is completed sooner, systems may be restored earlier. Applications, including eReminder, eJuror, and eTraffic will not be affected. Thank you for your patience and understanding. 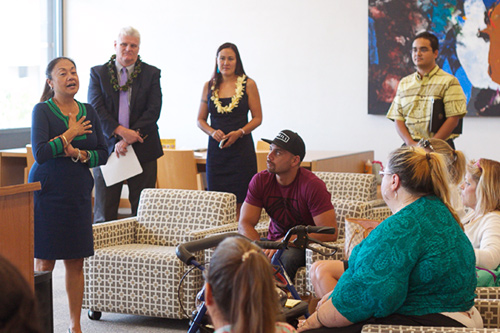 Chief Justice Recketnwald noted that while in 2017 we recognize the genius of those who drafted and signed the U.S. Constitution 230 years ago, we must recognize the gap between our nation’s promise of equal justice for all, and the reality that exists on the ground.

“One of the most significant challenges to equal justice today is the lack of effective access to our civil justice system,” said Chief Justice Recktenwald. “The reason is simple – people who have low or even moderate incomes cannot afford to hire an attorney to represent them in their civil legal cases. Although there is a right to counsel in criminal cases, there is, with only a few exceptions, no such right in civil cases. A key milestone in our efforts to address these challenges has been the establishment of the Hawaii Access to Justice Commission. The Commission was created in 2008, with the goal of providing sustained focus to our efforts to increase access to justice. The Commission has achieved amazing results with extremely limited resources.”

Chief Justice Recktenwald went on to give updates on the progress Hawaii has made towards achieving 100 percent access to justice in our communities through a continuum of meaningful and appropriate services, including the use of courthouse self-help centers, technology, and language access services.