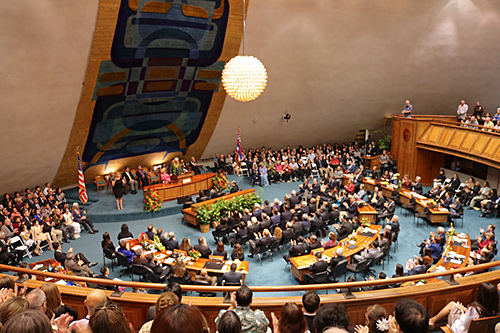 Chief Justice Mark E. Recktenwald delivers the 2017 State of the Judiciary address in the Senate Chamber of the Hawaii State Capitol, January 25, 2017.

The Chief Justice began by thanking Judiciary supporters, including the Hawaii State Legislature:  “I thank the Legislature for its strong support of the Judiciary.  We are grateful to all of you for funding construction of a new courthouse in Kona,” said Chief Justice Recktenwald.  “When that courthouse opens in 2019, it will provide the people of West Hawaii with a modern, efficient and secure place for obtaining justice.”

The Chief Justice also thanked Governor Ige for his strong support of the Kona courthouse and the Judiciary’s efforts to increase access to our civil justice system.

He acknowledged the Judiciary staff and judges for working every day to accomplish the Judiciary’s mission:  “I am grateful to our eighty-two full time judges, many of whom are here today, and our dedicated staff who strive to ensure that everyone is treated with fairness and respect when they come before our courts.”

“One of the most fundamental roles of the courts is to ensure the safety and well-being of our community.  We do that in many different ways.  First and foremost, we provide a fair and transparent forum for the peaceful resolution of disputes.  We do a lot of that:  this past fiscal year, alone, more than 100,000 cases were filed in Hawaii’s courts, along with hundreds of thousands of traffic and parking citations,” Chief Justice Recktenwald stated.

Although the Judiciary’s core mission is deciding cases, the Chief Justice shared about the court’s role that goes beyond the courtroom.  He talked about how the courts are helping to address the underlying problems that affect our community such as drug addiction and homelessness through programs like the Veterans Treatment Court, Mental Health Court, Drug Court, HOPE Probation, and the Steps to Avoid Eviction program.

The Chief Justice also discussed Family Court and the work being done to protect families and children.  He highlighted an innovative program to address truancy, started by judges in First Circuit (Oahu) Family Court, in partnership with the Departments of Education and the Attorney General, as well as the Office of the Public Defender.  Waianae Intermediate School was selected as the site to implement this pilot project last school year, since it had the highest rate of truancy among middle schools on Oahu.

“Of the 63 students in the program, most had missed more than 3 months of the prior school year,” said Chief Justice Recktenwald.  “The results were amazing.  78% of those students completed the school year with less than 10 unexcused absences.”

Another area with tangible results is the Judiciary’s efforts to increase access to justice.  In 2016, Hawaii was ranked among the top three states in the country for practices that provide access to justice.  These practices and initiatives include partnerships for Self-Help Centers, Hawaii’s Online Pro Bono (HOP), and self-help interactive form software, all of which assist individuals who cannot afford a lawyer to better navigate the legal system.  A recent study showed that for every dollar spent on civil legal services in Hawaii, more than $6 is returned to the economy.

Chief Justice Recktenwald also unveiled Hawaii Courts mobile, a free mobile app that will make it easier to access a wealth of information about the courts.  Hawaii is only the second statewide judiciary in the country to offer this service.  “We view technology as an opportunity to make the courts more transparent, more accessible, and more responsive,” he said.

The Chief Justice concluded the address by talking about the challenges of the future and the values that will guide the Judiciary as it moves forward.  These values include transparency and integrity.

“Integrity means standing up for what is right, even when it is not easy or comfortable to do so,” said Chief Justice Recktenwald.  “For judges, it means faithfully applying the law to the facts of each case, without regard to the popularity or status of the parties, or fear of reprisal.  Throughout Hawaii’s history as a state, our courts have been open to all.  Our merit-based system of judicial selection and retention gives judges the independence to make the call when the legal interests of a minority are challenged by the will of the majority.  Our judges are grateful for that trust and ever mindful of the great responsibility that accompanies it.