Lanai Outreach with the Keiki Network and the Lanai Community 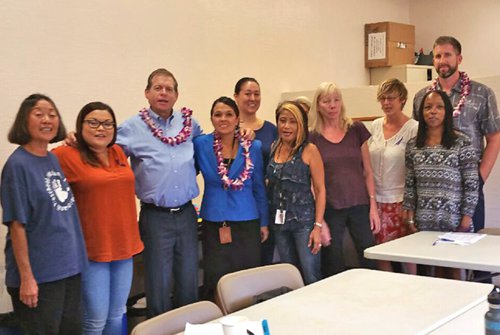 Second Circuit Family Court Judge Lloyd A. Poelman and Second Circuit District Court Judge Adrianne Heely were featured speakers at a two-part Judiciary Outreach Workshop for Lanai’s Keiki Network and the residents of Lanai. The purpose of the workshop was to help people make more informed decisions about their court cases through better understanding of their legal rights and options, of the laws and court proceedings, and of the different components of the Judicial System.

The morning session provided training for Lanai’s Keiki Network, a community-based organization of various agencies and service providers interested children’s well-being issues on Lanai. Members of this consortium were given information on Hawaii’s Judicial System, the District and Family Courts, and the roles, responsibilities, and functions of the Offices of the Prosecutor and Public Defender. The afternoon session was an outreach program for residents of the Lanai community explaining the functions of the Family Court and District Court, how the Prosecutor’s Office interplays with the District Court, and how the criminal justice process works.

Judge Poelman discussed co-parenting and emphasized the need for parents and the court to put the best interests of children first in custody cases. Judge Heely covered the eviction process, including what tenants can do, what landlords can do, and the general rights of both parties.

“I know that we all enjoyed working on this outreach to the Lanai service agencies and community very much,” said Judge Poelman. “The Hawaii State Judiciary extends its appreciation and thanks to Lanai Keiki Network Chair Butch Gima, the Maui Public Defender’s Office Director Wendy Hudson, Deputy Prosecuting Attorney Brandon Segal, and residents of Lanai who helped organize the event and served as presenters. We’re also very grateful to the Hawaii Community Foundation’s Koa Foundation, whose generous support made this program possible.”

Videos of the Judiciary presentations are now available online at: