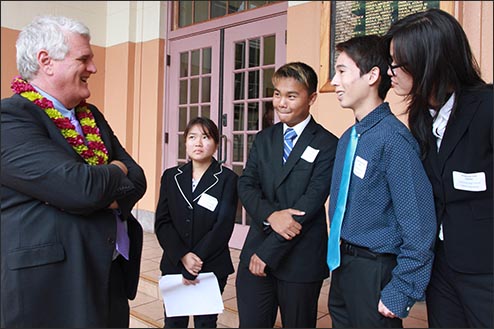 To prepare, the participating juniors and seniors from each school studied a curriculum developed by the Kamehameha V Judiciary History Center and the Students for Public Outreach and Civic Education of the University of Hawaii’s William S. Richardson School of Law.  Attorneys from the Hawaii State Bar Association also volunteered their time and facilitated a moot court activity in the participating classrooms, where the students had the opportunity to argue the case themselves before attending the Courts in the Community event.

“Our Courts in the Community program is about hands-on civics education and providing students with a chance to go beyond the textbooks by observing a real Supreme Court oral argument in person.  Through this experience, we hope that the students realize it is a process with integrity, one that’s designed to get the truth.  That understanding is vital to the future of our democracy,” said Chief Justice Mark Recktenwald.  “I would like to extend a special mahalo to the teachers, the Hawaii State Bar Association, and the dozens of volunteer attorneys who helped make this happen.  These invaluable partnerships are what make the program a success.”

“I’d like to thank our attorneys who enthusiastically volunteered to visit participating classrooms for pre-event discussions and preparations,” said Jodi Lei Kimura Yi, HSBA President.  “It was exciting to see the students intently following the arguments and asking very probing questions after the official court proceedings.”

The court heard oral argument in the case of State v. Trinque.  Oral argument was followed by two separate question-and-answer sessions for the students; one with the attorneys and another with the five justices.