Next group of students scheduled for tomorrow, when 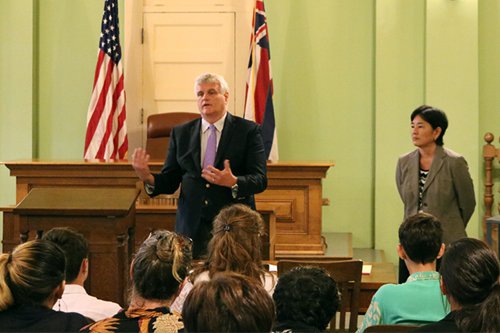 Some of the student groups also participated in a mock trial, gaining first-hand experience of how cases go to trial and how individual rights are exercised and protected in our system of justice. The next mock trial is scheduled for this Friday, September 16, 2016 at Ali`iolani Hale (Hawaii Supreme Court building) in the building’s 1913 Courtroom from 11a.m. to noon.

The homeschool students, pictured above, were welcomed by Hawaii Supreme Court Chief Justice Mark Recktenwald and Intermediate Court of Appeals Associate Judge Lisa Ginoza, who provided an overview of the Hawaii state courts and the role the courts play in our democracy.

“This Saturday, September 17th, marks the 229th anniversary of the signing of the United States Constitution,” said Chief Justice Mark Recktenwald. “Constitution Day is a celebration of this remarkable and enduring document. It enshrines principles fundamental to our system of democracy, including separation of powers, individual liberties, and federalism, the balance between federal and state governments.”

“It is refreshing to see these young students taking so much interest in the Constitution and the role the Judiciary plays in upholding fundamental rights,” said Intermediate Court of Appeals Judge Lisa Ginoza. “I’m privileged to work for an institution that places so much value on civic education. It’s important to invest in these future leaders.”

Lora Burbage, an independent civics teacher and debate coach, has been organizing Constitution Day field trips through the Judiciary History Center for eight years and says: “The Judiciary History Center offers a very good service. It’s wonderful that these judges are willing to speak to the students. It’s good exposure for the kids, and may inspire them about the idea of going into law.”

The Judiciary History Center offers schools, colleges, and the general public a number of law-related educational activities and resources. It has provided thousands of students the opportunity to become more informed, involved, and effective citizens. The Center’s website also offers prepared lessons for use in the classroom and in the Restored 1913 Courtroom. Please visit their website at jhchawaii.net for more information.