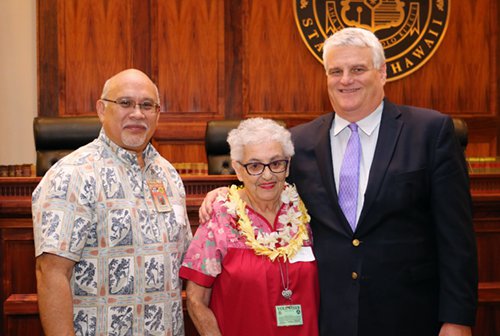 Administrative Director of the Courts Rodney Maile (far left) and Chief Justice Mark Recktenwald (far right) with Volunteer Millie Botelho (center). Botelho has been volunteering with the courts for more than 20 years, following her 30-year career with the Judiciary.

On September 30, 2016, the Hawaii State Judiciary celebrated the 45-year anniversary of its Volunteers in Public Service (VIPS) to the Courts Program by acknowledging the contributions of 1,322 Oahu participants at its annual Volunteer Recognition Ceremony. In the past fiscal year, First Circuit (Oahu) volunteers provided more than 52,000 hours of combined service, for a total estimated in-kind donation of $449,000 to the Hawaii State Judiciary.

Established in July of 1971, the VIPS program was originally called Volunteers in Probation, with a focus on providing volunteer role models for youth probationers in the First Circuit. In 1980, the program was renamed Volunteers in Public Service (VIPS) to reflect the expanded scope of the program, which enlisted volunteer support for staff in administrative offices and various courthouse departments.

Today, volunteers in the Judiciary’s VIPS Program provide support services for court operations throughout the First Circuit, from judges’ chambers to programs such as the Court Appointed Special Advocate (CASA) Program, Kids First, the Judiciary History Center, the Children’s Justice Centers, and more.

“For 45 years, we have been blessed to have more than 20,000 volunteers contributing more than 14 million hours to the Hawaii State Judiciary, supporting our staff and directly assisting the public,” said Administrative Director of the Courts Rodney Maile. “The Judiciary is currently the only branch of our state government with a formal volunteer program, and our volunteers are an integral part of the Judiciary’s mission. Quite simply, we cannot do what we do without them.”

For information on volunteer opportunities with the Hawaii state court system, visit the VIPS web page at: www.courts.state.hi.us/outreach/volunteer_opportunities, or call (808) 539-4880.