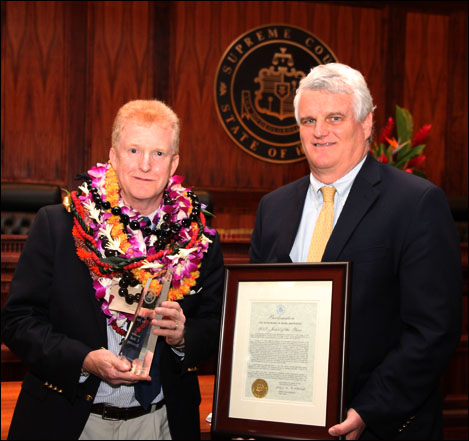 R. Mark Browning was presented the Judiciary’s Jurist of the Year Award by Chief Justice
Mark Recktenwald on November 15, 2013.

R. Mark Browning, deputy chief judge and senior family court judge of the First Circuit Family Court, was honored as the 2013 Jurist of the Year at an awards ceremony held November 15 at the Hawaii Supreme Court courtroom.

Judge Browning, who was first appointed to the bench in 1997, is a chair of an inter-branch working group. The group is currently analyzing the juvenile justice system to develop data-based policy recommendations to present to the legislature. Also, Judge Browning is working with judges and staff to develop and implement a strategic plan for the family court while providing training to family court judges statewide on a regular basis, and working closely with the family law section of the Hawaii State Bar Association.

“Throughout his career, Judge Browning has worked tirelessly on many innovative projects, all with the goal of improving family court services to the public and the lives of our youth and their families,” said Chief Justice Mark Recktenwald, who selected Judge Browning from nominations submitted by Judiciary employees and members of the Hawaii bar. “Judge Browning is passionate about his role in the judiciary, and his enthusiasm, energy, and desire to make a difference are contagious among his colleagues and staff,” he said.

Also at the ceremony and at other ceremonies on Oahu, the Big Island, Maui and Kauai, Judiciary employees were recognized for their outstanding contributions to the court system.

A Group Meritorious Service Award was presented to the First Circuit’s Fiscal Management and Support Services Branch. The individuals who were recognized as members of this team are Tracy Chan, Rowena Coronel, Raquel Hironaka, Reid Iwamoto, Brian Lee, Mark Masunaga and Jody TinLoy.