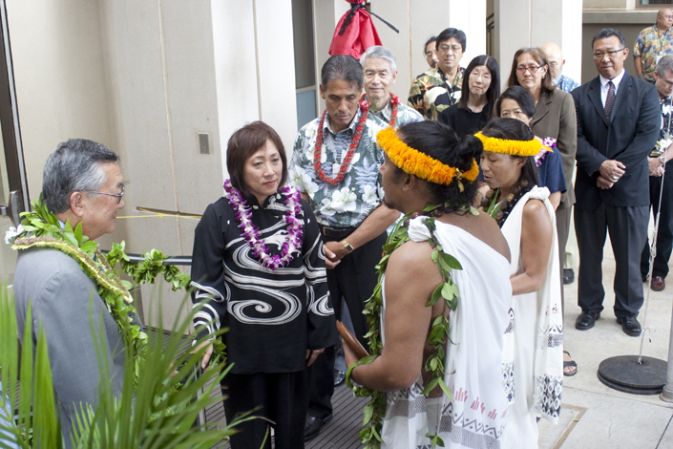 Guided by Kahuna Braven Kalama Cabigon, Chief Justice Ronald Moon (left), Senate President Colleen Hanabusa (right), and many others who played a significant role in the construction of the Kapolei Judiciary Complex untied the maile at the main entrance of the courthouse during the May 28 dedication ceremony.

The official dedication ceremony of the Kapolei Judiciary Complex was held on Friday, May 28 against the backdrop of the Waianae mountains, the colors of which were mirrored in the matching green, brown and blue colors of the building’s roof.

The ceremony began at 1:30 p.m. with a welcome from the Mistress of Ceremonies, newscaster, and Kapolei resident Paula Akana, followed by a mele oli, or Hawaiian chant, by Braven Kalama Cabigon.

The traditional parting of the maile lei concluded the ceremony.

As with most celebratory occasions of this sort, smiles abound on the faces of the 200-or-so employees, judges, juvenile detention staff, court administrators, community leaders, elected officials and others present.

A new court complex that will facilitate access to justice for all Oahu residents has long been a goal of Chief Justice Moon, who has said, “Through the eventual phasing-in of a full service court operation at Kapolei, the Judiciary will provide a complement of court services appropriate to a major urban area.  This is consistent with our philosophy that judicial services must be conveniently available to all.”

Chief Justice Moon should be pleased to see the Kapolei Judiciary Complex become a reality because it has been a long time coming.  In fact, it’s taken over 20 years and $124.5 million to get the 123,118-square-foot courthouse and 52,306-square-foot juvenile detention facility built, which would not have been possible if not for Chief Justice Moon’s determination to provide a safer, more secure, and operationally conducive and efficient facility in which the public, employees, parties, attorneys and all other court users can conduct their business.

In recognition of this significant achievement, the Twenty-Fifth Legislature adopted Senate Concurrent Resolution No. 38 recommending that the Kapolei Judiciary Complex be renamed the “Ronald T. Y. Moon Judiciary Complex.”  A renaming event will be held later this year.

Here are a few more facts about the complex: