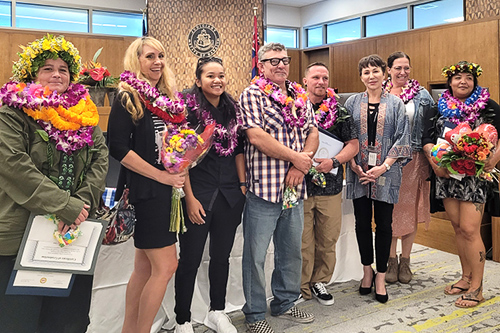 The Big Island Drug Court’s (BIDC) 64th graduation ceremony at Keahuolu Courthouse, recognized the success of eight new graduates on October 24. Friends and family, along with fellow Drug Court participants, the deputy prosecutor, deputy public defender, and the Judiciary’s Drug Court staff gathered in the courtroom or watched on Zoom in support of the graduates as they took their next steps toward success in life.

The Big Island Drug Court program began in 2002 to address community problems related to substance abuse. Under the leadership of the Drug Court judge, the BIDC works with the prosecutor’s office, public defender’s office, substance abuse and other professional treatment providers, police, and probation to provide effective treatment and support to adults struggling with addiction.

To date, 364 men and women have completed the BIDC’s Adult Program. Approximately 90% have remained conviction-free of felony offenses for at least three years after graduation.