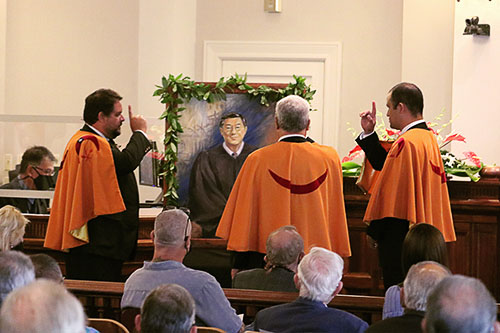 Family, friends, colleagues, and dignitaries gathered in the Supreme Court Courtroom at Aliiolani Hale. Despite the limited in-person capacity due to social distancing guidelines, hundreds of people watched the proceeding on the judiciary’s YouTube channel to hear special guest speakers share their many fond memories of “CJ Moon”. At the direction of Governor David Ige, flags at state office buildings were flown at half-staff that day as a mark of respect.

Special guest speakers extolled CJ Moon’s many positive personal qualities, including his unmatched dedication to public service and to the people of Hawaii; his incredible work ethic; an unwavering commitment to treat each person with dignity and respect; and his humility and genuine care for the people with whom he worked.

CJ Moon was friendly and approachable to all, and was known to walk the halls of courthouses throughout the state to talk story with court staff. Judge Michael F. Broderick even recounted a touching memory of CJ Moon giving the eulogy at the memorial service for a long-time janitor. He truly cared for the people around him.

As an attorney, CJ Moon was respected as an excellent litigator and a worthy adversary. He approached each case seeking a fair outcome, not just “a win”. Many speakers praised him for his steadfast belief in justice for all, a principle that guided him on the bench. His reputation preceded him; those who appeared before him in court knew they would be treated fairly.

Speakers noted that CJ Moon understood the significance of his work, the consequences of the supreme court’s decisions, and the profound honor of leading the judiciary. Even with the magnitude that comes with the position, he balanced that with a hearty sense of humor.

CJ Moon was the first Korean-American to serve as the chief justice of an American court. He never forgot his humble beginnings in Wahiawa, as he worked tirelessly to improve access to justice, and to ensure that the promise of equal justice remains a fundamental tenet of our judiciary. He also served as mentor to many, always willing to guide, to teach, and to counsel others throughout their careers. 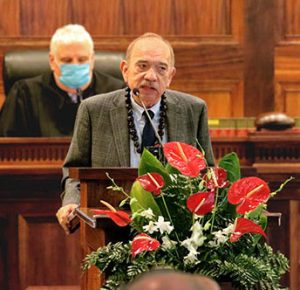 Former Gov. John D. Waihee III speaks fondly about CJ Moon, whom he appointed Associate Justice of the Supreme Court in 1990 and Chief Justice in 1993.

CJ Moon was respected nationally for his leadership. In particular, he was a steadfast advocate of ensuring that the most vulnerable of our community had access to our courts, was committed to civic education, and was a staunch advocate of an independent judiciary as a co-equal branch in the American system of democracy.

“We have indeed lost a legend,” remarked Chief Justice Recktenwald after the event, “and we are all better for having known him.”

The Judiciary History Center created a beautiful banner to honor CJ Moon. It stands in the lobby of Aliiolani Hale. You can view the banner here.