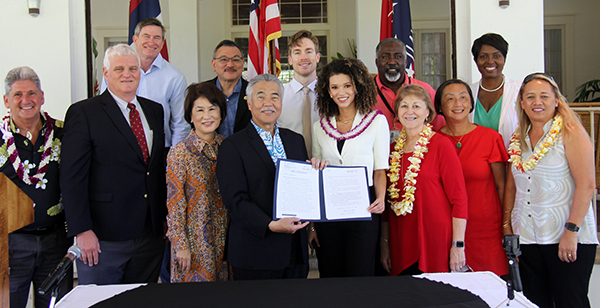 Aloha, and mahalo to Governor Ige for inviting me to attend this historic bill-signing, recognizing a day of observance for Juneteenth. I’d also like to thank the legislature and recognize all of those who worked tirelessly to support this bill, particularly Miss Hawaiʻi USA Samantha Neyland and the Juneteenth Coalition.

Today’s ceremony represents a long-overdue recognition of a watershed moment in history. On June 19, 1865, news of the Emancipation Proclamation and the end of the Civil War reached Galveston, Texas, and a quarter of a million Black Americans were freed in that state alone. Juneteenth both commemorates the end of slavery in the United States and celebrates the contributions of Black Americans, upon whose labor the country as we know it was built, to our nation’s history.

While Juneteenth is a time to reflect on the past, it is also an opportunity to recommit to a more just and equal future. On June 19, 2021, the first Juneteenth Day of Observance in Hawaiʻi, please take time to consider the ways in which the promises embodied in the Emancipation Proclamation – particularly, the promise for those who were enslaved to be “thenceforward, and forever free” – have not been met. At the Judiciary, an institution founded on the treasured American ideal of “equal justice for all,” we are committed to changing the ways in which the promises integral to “freedom” have not been met for the most marginalized. That work has begun on many different fronts: from reforming bail and other aspects of our criminal justice system to starting important discussions with the community about other actions needed to end systemic inequity. I thank our Committee on Equality and Access to the Courts for organizing conversations this spring that brought together hundreds of people to reflect on where we are today and how we can improve tomorrow.

As we celebrate this bill’s passage and reflect on the significance of Juneteenth, we must all recognize that there remains much work to be done and reaffirm our shared commitment to doing that work. As the Reverend Dr. Martin Luther King, Jr., said when he spoke in Honolulu in 1959: “We have come a long, long way. We have a long, long way to go.”