Kona Drug Court participants and staff at the KTA Super Store in Kailua-Kona for their May 4, 2018 food drive.

The Big Island Drug Court (BIDC) gave back to the Hawaii Island community in May with a number of special events commemorating National Drug Court Month 2018.

Volunteers with the Kona Drug Court gathered at the KTA Super Store in Kailua-Kona on May 4 to collect donations of non-perishable foods and monetary contributions for The Food Basket, Inc., “Hawaii Island’s Food Bank.” They collected 151 pounds of food and over $1,400 in cash donations.

On May 11, BIDC volunteers held a second food drive by the Hilo Drug Court in support of The Food Basket, Inc., collecting 354 pounds of non-perishable foods and more than $1,500 in monetary donations. 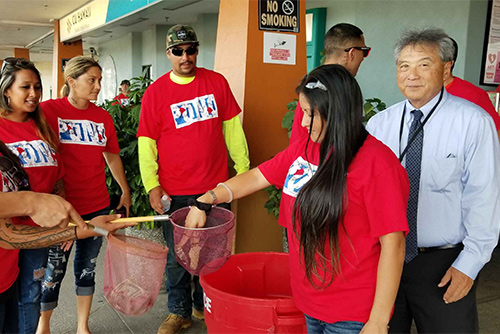 The BIDC selected The Food Basket, Inc., as the focus of its 2018 National Drug Court Month community project to help support the charity that provides for Big Island residents in need, including children from low-income or homeless families, elderly, veterans, and many addicts in the early stages of recovery. This year, The Foodbasket is also sending aid to Hawaii Island residents impacted by the volcanic eruptions in Puna. 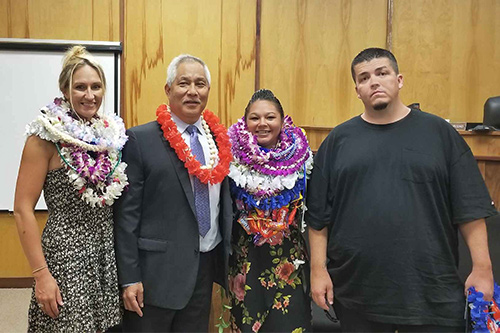 The 43rd BIDC graduation ceremony was held on May 7, at the Kona Courthouse to acknowledge the success and achievements of three new graduates. Immediately following the graduation ceremony, the court hosted a Kona Drug Court Appreciation Luncheon to acknowledge employers, sponsors, family members, and community members for their support of the program and its participants. 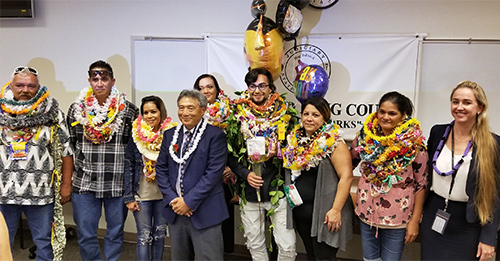 The 2018 National Drug Court Month events were concluded on May 31, when the BIDC hosted its Hilo Drug Court Appreciation Event to acknowledge employers, sponsors, family members, and community members for their support of the Drug Court Program and its participants. Thereafter, attendees joined the BIDC for a courtroom ceremony celebrating the success of the seven members of its 44th graduating class.