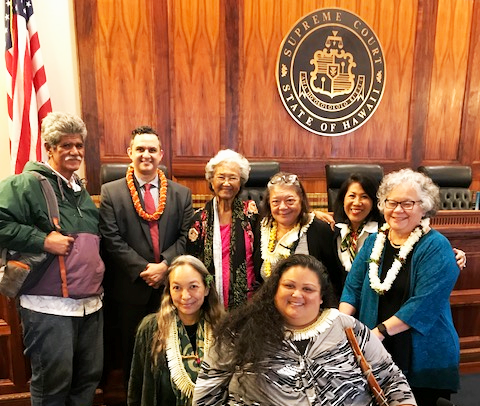 Where there are people, there are conflicts. That is why six organizations, together with experts from the Columbia Law School Mediation Clinic, put on a series of events to continue to educate the Hawaii community about using various forms of conflict resolution to forge more positive and fruitful negotiations.

Indigenous Conflict Resolution:  Practice and Integration
Native Hawaiians and Native Americans have used Hooponopono and native peacemaking, respectively, to address conflicts in families and their greater communities. Moderated by Laurie Tochiki of EPIC Ohana, a panel of distinguished individuals discussed the possibilities and implications of integrating indigenous conflict resolution practices in the practice of law and the court system. The panelists were:  University of Hawaii Assistant Professor Malia Akutagawa, Native Hawaiian attorney and activist Yuklin Aluli, Hooponopono practitioner Laulani Teale, and Columbia Law School Professor Shawn Watts.  Those of you who were unable to attend can view the panel discussion on Olelo.  It is scheduled to air during Law Week, the first week of May.

Talk Story:  Strategies to Bridge Cultural and Generational Gaps in Conflict Resolution
From intra-familial conflicts to commercial disputes, the issues that the people of Hawaii face every day have roots in cross-cultural and cross-generational misunderstandings. This talk story session was an opportunity to share stories and generate best practices.

Multilateral Negotiation:  Tools for Conflict Resolution and Prevention
Professor Shawn Watts, the associate director of the Columbia Law School Mediation Clinic, led a special program on exploring the characteristics and processes of multilateral negotiations, and considering how the model could be applied to address social, political, and economic issues in the Hawaii community. Multilateralism is a process of international negotiation involving primarily, although not exclusively, state actors and at least three parties. In the international context, effective multilateral negotiations help resolve and prevent conflicts.

“It is our hope that this week’s events sparked a broader community dialogue on the importance of Hooponopono as an ADR process, helped to promote best practices in bridging cultural and generational divides, and introduced new conflict resolution strategies to address our complex community problems,” said Cecelia Chang, Director of the Judiciary’s Center for Alternative Dispute Resolution.