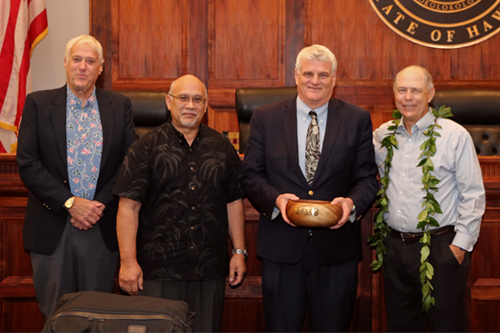 “The Spirit of Justice Award is HJF’s most prestigious award, given annually to individuals who have made a substantial contribution to access to justice,” said Robert J. LeClair, the organization’s executive director.

“Chief Justice Recktenwald has been a leader in bringing access to justice to higher prominence in Hawaii. He is the moral impetus behind all of our state’s access to justice initiatives. With his leadership and input, community interest has increased,” LeClair added.

“Since becoming Chief Justice in 2010, CJ Recktenwald has been one of the leading advocates for access to justice, from our nation’s capital, to our State Legislature,” said Rodney Maile, administrative director of the courts. “He has taken access to justice from what was a new concept in 2008, to being a guiding principle that is incorporated into every facet of how the Judiciary provides services to our communities.”

The Hawaii Justice Foundation is an independent, tax-exempt grant making organization whose sole purpose is to achieve justice for Hawaii’s people. The Foundation was established in 1969 as a vehicle for philanthropic law-related projects in the State of Hawaii. Its membership is made up of lawyers, lay advocates, social scientists, judges, volunteer mediators and arbitrators, paralegals, notaries public, guardians ad litem, social workers, court clerks, court reporters, and anyone else who believes in reasoned problem-solving and the rule of law.