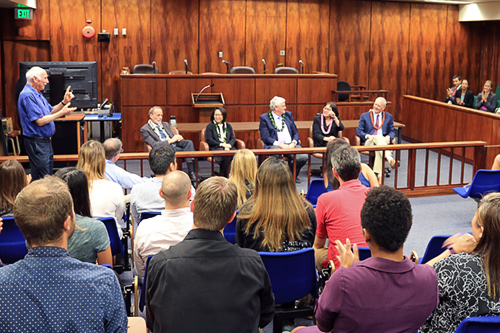 On Tuesday, April 4, 2017, Justices of the Hawaii Supreme Court heard oral argument in State of Hawaii vs. Sean Conroy at the University of Hawaii at Manoa William S. Richardson School of Law.  This was the seventh oral argument since 2011 to be heard by the Supreme Court at the School of Law.  It was held in the evening so that law students from both the Full-Time JD Program and Part-Time/Evening Program could participate.

This event was made possible through an ongoing partnership between the Judiciary and the UH Richardson School of Law.  Throughout the year, the Judiciary collaborates with the Law School and its students on a variety of activities and programs.  One such program is Courts in the Community, an outreach initiative designed to educate students and inform the public about the Judiciary’s role in government and its function in resolving disputes in our democratic society.  The Law School’s Students for Public Outreach and Civics Education are key partners in developing the curriculum for Courts in the Community.