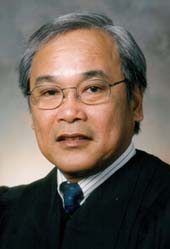 It is with great sadness that we learned of the passing last evening of former Hawaii State Supreme Court Associate Justice Mario R. Ramil.

Justice Ramil was a true public servant who dedicated his life to serving the people of Hawaii.  He is remembered with distinction for being the second Filipino American in Hawaiʻi to be appointed as a Hawaii Supreme Court Justice.  Justice Ramil also served Hawaii as the state’s Director of Labor and Industrial Relations, as Insurance Commissioner in the early 1980s, and as Deputy Attorney General.

“We are deeply saddened by the passing of Justice Ramil,” said Chief Justice Mark Recktenwald.  “He was an outstanding justice who made a lasting impact on the Supreme Court, and a warm and caring person.  He also served the people of Hawaii with distinction in many other leadership roles during his career, including as our state’s Insurance Commissioner.  Our sympathy goes out to his wife Judy, and their sons Jonathan and Bradley.”

The obituary appears in the Friday, February 10, 2017 edition of the Honolulu Star-Advertiser.