Skip to Content
Home » Featured News, News & Reports, Uncategorized » Above and Beyond: Judge Heely Wins Humanitarian of the Year Award

Above and Beyond: Judge Heely Wins Humanitarian of the Year Award 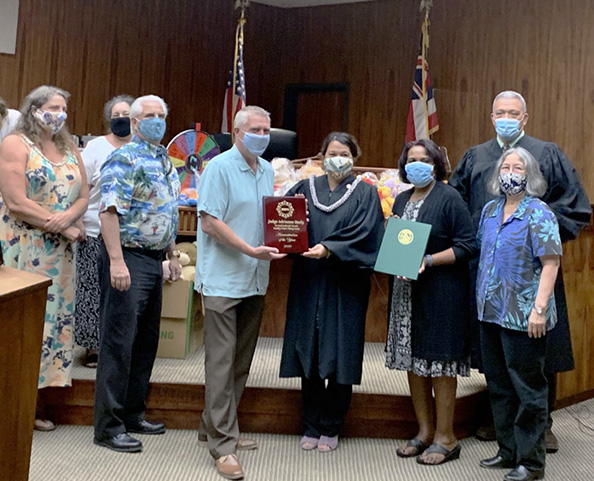 The award is given to an “outstanding individual who freely give of time, talent, and treasure.” She was also recognized for successful stewardship and motivating others to help those in need.

Tonnessen said that Judge Heely “has gone above and beyond to ensure that all of the children, parents and those suffering from substance use coming before her are treated with compassion, empathy and dignity.” He went on to laud her for her understanding of the significant role trauma plays in behavior and works hard to find alternative consequences through programs and therapeutic care.

The group nomination also cited her “above and beyond” approach to justice. They said, “Judge Heely embodies grace and the spirit of aloha” in all she does to better the lives of the children and families who come before her. They cited the many special and thoughtful ways she guides the families, including providing stuffed animals to children to ease the anxiety of being in court and playing Santa during the holidays.

Judge Heely also received a Certificate of Recognition from Maui County Mayor Michael P. Victorino. It said, in part, “Thank you for generously giving empathy, concern and respect to all who appear before you and for taking a genuine interest in healing, protecting and preserving families.”