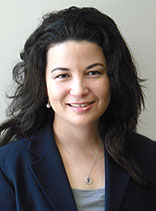 Medeiros has been a partner in the Honolulu firm of Kleintop, Luria & Medeiros, LLP since 2008, where she specializes in family law. Prior to joining the firm in 1998 as an associate, she was an associate with the Honolulu law firm of Damon Key Leong Kupchak Hastert.

Medeiros received her law degree from the University of Hawaii William S. Richardson School of Law. She currently sits on the Board of Directors of the Family Law Section of the Hawaii State Bar Association and has previously served as the Section’s chair.

Medeiros has served on a number of Family Court committees and has also served as a volunteer settlement master and special master for the Court. Over the past ten years, she has been a presenter at numerous seminars and continuing legal education events on topics related to family law. Since 1996, she has been a volunteer with Volunteer Legal Services of Hawai`i, a non-profit legal service provider.

The chief justice appoints district court and district family court judges from a list of not less than six nominees submitted by the Judicial Selection Commission.