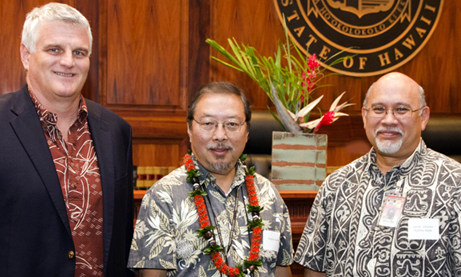 Officials and staff of the Hawaii State Judiciary and its Volunteers in Public Service to the Courts program (VIPS) thanked their Oahu-island volunteers at the organization’s annual recognition ceremony held on Sept. 30 in the Supreme Court courtroom.

In thanking the volunteers, Chief Justice Recktenwald said, “I am honored to be here to recognize the outstanding volunteers who have generously given their time to the Judiciary. You enable us to serve the public more effectively, and advance the cause of justice in our community in so many different ways.”

Judiciary volunteers serve in many positions, including as law clerks, probation aides, divorce education program facilitators, bar exam proctors, docents, clerical aids and judicial assistants. Altogether, VIPS volunteers contributed over 43,000 hours in FY2011, which equates to more than $311,750 in in-kind donations. The total number of registered volunteers for this past fiscal year is 774, which exceeds last year’s nine-year record high by more than a hundred.

During the ceremony, Wayne Sakai received special recognition for volunteering 1,512 hours last fiscal year. The total number of hours contributed by Sakai is an all-time high in number of hours contributed by a volunteer in a year. The previous record was 1,420 hours. Sakai began volunteering as a Youth Case Aide shortly after retiring from the First Circuit Family Court in 2009.  As a Youth Case Aide, Sakai works with juveniles and their families.

For information on becoming a volunteer with the Hawaii state court system on Oahu, call 539-4880.