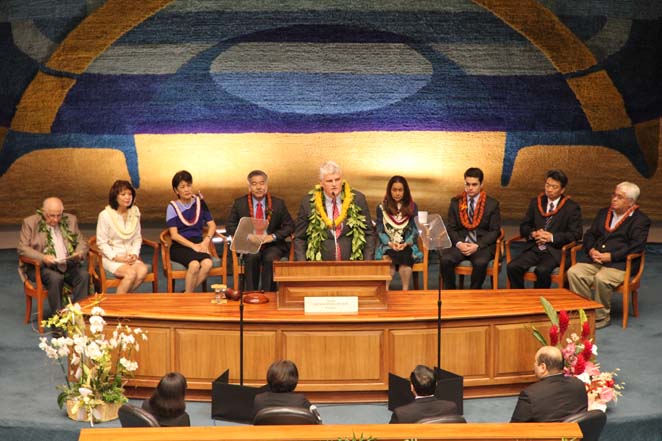 HONOLULU – Hawaii Supreme Court Chief Justice Mark Recktenwald delivered the State of the Judiciary address today at a joint session of the State Senate and House.

Video of the State of the Judiciary address, is available.

“The mission of the Judiciary is to deliver justice for all.  We do that in many different ways, both in the courtroom and in the community.  We ensure that people are treated fairly, whatever their background.  We uphold the rights and protections of the constitution, even when doing so may be unpopular.  We provide a place where people can peacefully resolve their disputes, as well as opportunities for them to move forward from the circumstances that brought them before the courts,” said CJ Recktenwald.

One key focus of the State of the Judiciary address was “Access to Justice,” and the Judiciary’s efforts to provide equal justice to all.  CJ Recktenwald thanked the Access to Justice Commission for achieving “amazing results with extremely limited resources,” and the many attorneys who volunteer their time towards this mission.  He highlighted the opening of self-help centers in courthouses across the state.  Since the first center opened in 2011, more than 7,600 people have been assisted, at almost no cost to the public.  The Judiciary is also using technology to expand its reach and accessibility. In partnership with the Legal Aid Society of Hawaii and the Hawaii State Public Library System, interactive software to help litigants fill out court forms, is now available on the Judiciary’s website and libraries statewide.

Additional Judiciary initiatives highlighted in the address include: the recent expansion of the Veterans Treatment Court to the Big Island; the First Circuit Family Court’s Zero-to-Three Court, which is designed to meet the needs of infants and toddlers whose parents are suspected of abuse or neglect; the Permanency Court, which focuses on the needs of kids who are “aging out” of the foster care system; and the Courts in the Community Outreach Program, which gives high school students the opportunity to go beyond textbooks and experience an actual Supreme Court oral argument.

CJ Recktenwald also discussed several new initiatives, including: a HOPE Pretrial Pilot Project, designed to apply the same HOPE strategies to defendants who have been charged with crimes and released on conditions prior to their trials; the Girls Court program, which will be expanding to Kauai next month; and confirmed plans for an environmental court to be implemented as scheduled by July 1, 2015.

CJ Recktenwald also addressed the challenges of the future.  One of the challenges he discussed was the need to improve infrastructure and to provide a new courthouse to meet the needs of the growing West Hawaii community.

“Currently in West Hawai‘i, court proceedings are being held in three different locations, in buildings that were not designed as courthouses, which in turn has led to severe security, logistical, and operational problems,” described CJ Recktenwald.  “To address these concerns, we have proposed building a centralized courthouse in Kona,” he added.

The Judiciary launched a new website this week dedicated to the Kona Judiciary Complex Project.  This website displays the preliminary design plans, provides project updates, and welcomes feedback from the public.

CJ Recktenwald concluded the address by thanking the more than 1,800 justices, judges, and judiciary staff “who put their hearts and souls” into making equal justice for all a reality each and every day.  He also thanked all the volunteers and partners in the community and other branches of government who work side-by-side with the Judiciary towards fulfilling the mission of providing justice for all in Hawaii.