Lawyers Without Rights: Jewish Lawyers in Germany under the Third Reich 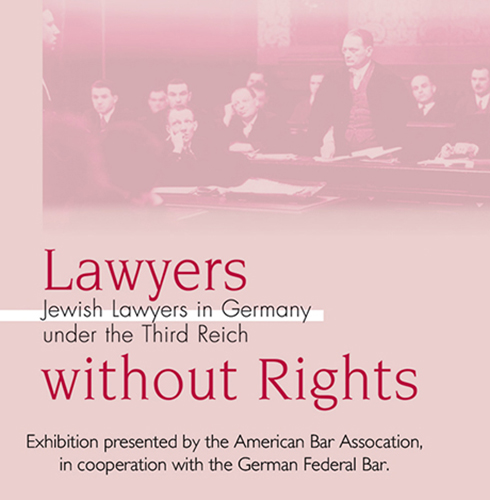 The King Kamehameha V Judiciary History Center hosts an exhibition presented by the German Federal Bar in cooperation with the American Bar Association and its Section of International Law. Lawyers Without Rights tells the story of the Nazi mistreatment of a huge percentage of German lawyers – those who happened to be Jewish – during WWII. The exhibition’s message resonates with people everywhere who understand and appreciate concepts and ideals of a just rule of law. When lawyers, the judicial system and the just rule of law are undermined, when the abuses go unchecked and are permitted to flourish, only tragedy can follow. Lawyers Without Rights conveys this lesson through riveting personal stories of attorneys living under the reign of Nazi Germany, a time in that country when individual rights and rule of law were utterly neglected.

The exhibition debuts on O`ahu at Ali`iōlani Hale, home of Hawaii’s Supreme Court, from January 12 to 29, 2015. It travels to Hawai`i for display at the Donkey Mill Art Center in Holualoa from February 6 – 20, and at the Mo`okini Library on the campus of the University of Hawai`i in Hilo from February 23 to March 30. Special programming for all venues will be announced as details are confirmed. For more information email info@jhchawaii.net or call 539-4999.