Skip to Content
Home » Featured News » “We the People”

Mililani High School’s “We the People: The Citizen and the Constitution” team took first place at the state level and will go to Washington, D.C. to represent Hawai`i at the national finals in April. The students and their teacher, Dr. Amy Perruso, were recently honored for their achievement by the state Senate and House of Representatives.

The students have been studying and practicing for months preparing for the competition. Each student on the team becomes an expert witness in one area of American constitutionalism, and testifies as part of a unit before a panel of judges acting as U.S. Congressional representatives.

The “We the People: The Citizen and the Constitution” program was developed by the Center for Civic Education to teach young people about the history and principles of the Constitution and the Bill of Rights, and is administered in Hawai`i by the King Kamehameha V Judiciary History Center. 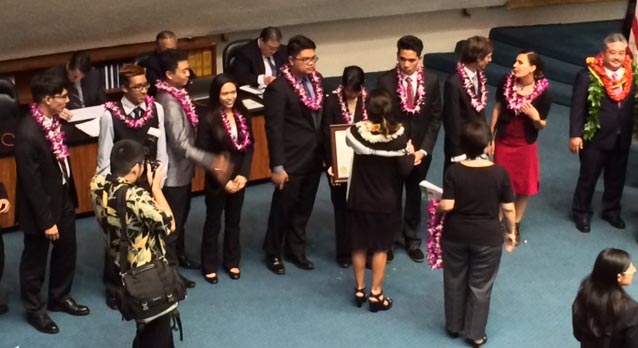 The students of Mililani High’s Advanced Placement Government and Politics class, and their teacher, Dr. Amy Perruso, were recognized by legislators as the state finalist in the “We the People” program.