On the evening of December 11, Leeward area residents attended a community briefing at the Waianae District Park to hear from representatives from the Hawaii State Judiciary, the Access to Justice Commission (the Commission) and legal service providers about what is being done in the area of access to justice.

The purpose of the event was to fulfill several of the Commission’s goals, such as educating the public about the importance of equal access to justice, assessing the problems low- and moderate-income people are facing in gaining access to the civil justice system, and increasing awareness of legal rights and of resources for legal assistance.

Chief Justice Recktenwald spoke about the Judiciary’s effort in improving access to the judicial system, including the implementation of self-help centers and access to justice rooms, and the establishment of the Commission. Justice Acoba, representing the Commission, addressed the Commission’s functions, the role that lawyers play, and gave examples of some of the Commission’s initiatives such as the Foreclosure Mediation Pilot Project.

In addition to the briefing held in Waianae, three other community briefings were held in 2012; one in Makiki on Oahu, one on the Windward side of Oahu, and one on Maui. 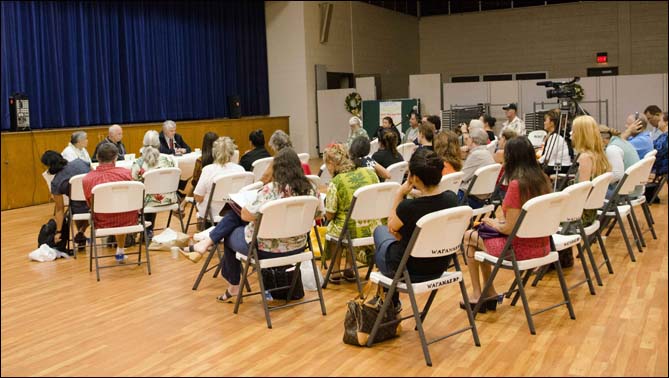 Area residents gathered at Waianae District Park to hear about access to justice initiatives and to dialogue with the panelists.