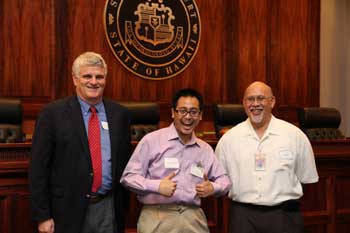 Rick Macapinlac was one of the volunteers recognized by Chief Justice Mark Recktenwald (far left) and Administrative Director of the Courts Rod Maile (far right)  during a program on September 28, 2012.

Of the 75 volunteers who attended the ceremony, three were recognized for having donated over 1,000 hours in the past year.

Chief Justice Mark Recktenwald said he appreciated all of the Judiciary’s volunteers. “You have advanced the cause of justice in our community by enabling us to serve the public more effectively,” he said.

During the past fiscal year, 941 Oahu volunteers donated approximately 50,000 hours working in a variety of positions such as case aids, bailiffs, docents, and law clerks.  The estimated value of the hours contributed by the volunteers amounts to $358,875 and is based on the minimum hourly wage set by the U.S. Department of Labor.