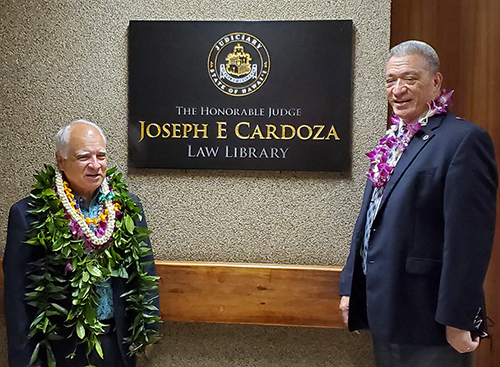 WAILUKU, Hawaii — The Second Circuit recently honored its long time chief judge by naming its law library The Honorable Judge Joseph E. Cardoza Law Library. Chief Judge Cardoza, who retired in June 2019 after 20 years of service to the Judiciary, was joined at the ceremony by his wife, Paulette, son, Joey, and judicial colleagues, along with family and friends via Zoom.

The dedication was a surprise for Judge Cardoza, leaving him momentarily speechless and clearly moved by honor.

Chief Justice Mark E. Recktenwald participated in the celebration via Zoom and read a certificate of recognition commemorating the occasion.

Second Circuit Chief Judge Richard T. Bissen, Jr., recalled that he was inspired to go to law school by then-attorney Cardoza. Judge Bissen eventually followed in the footsteps of his mentor, rising to Chief Judge.

The beautiful granite plaque pictured above was fabricated by several local vendors under the direction of Joey Cardoza, and the gold and white lettering was meticulously hand-painted by Kaʻihi Bissen.