2020 Jurist of the Year and Judiciary Employees Honored 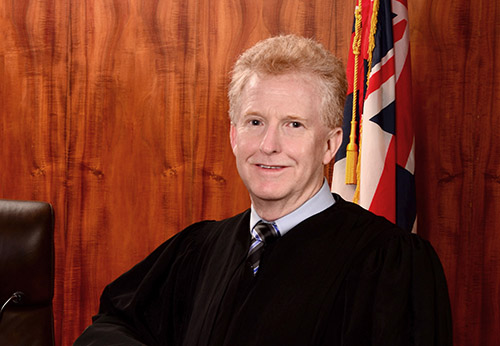 “Judge Browning has displayed exceptional judicial competence in many different ways,” said Chief Justice Recktenwald. “As a probate judge, he utilizes both his vast knowledge of the law and his understanding of the underlying emotional and family dynamics, effectively resolving complex disputes.

“He has been an outstanding leader of the First Circuit, especially in response to the challenges posed by the COVID-19 pandemic. Judge Browning’s leadership style of grace, gratitude and courage has enabled him to address unprecedented challenges with a clear and sensible approach, building trust and confidence among fellow judges, employees, and the bar, and bringing them together to collaboratively solve problems. He has been a strong supporter of innovative programs such as Community Outreach Court, and a mentor to countless other judges,” he added.

The Jurist of the Year is selected annually by the Chief Justice from nominations submitted by Hawaii attorneys and Judiciary personnel. The award recognizes a full-time trial judge who exhibits exceptional judicial competence, evidenced by decisional quality; significant extra-judicial contributions to the administration of justice; and active participation in public service to the community at large.

In addition to honoring the Jurist of the Year, the Hawaii State Judiciary presented individual and group awards to employees who have distinguished themselves through exceptional service and accomplishments. The recipients of this year’s awards are: