Clyde J. Wadsworth Sworn In as New Associate Judge of the Hawaii Intermediate Court of Appeals 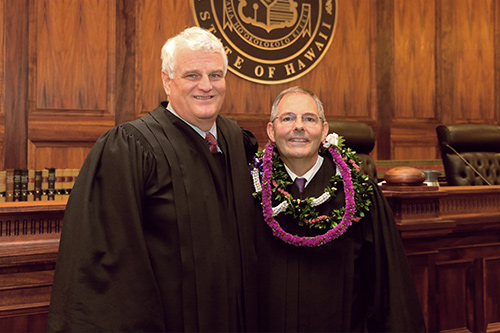 HONOLULU – Family, friends, colleagues, and supporters gathered in the Supreme Court courtroom on November 12, 2019, as the Hawaii Supreme Court convened in special session for the formal swearing-in ceremony of Clyde J. Wadsworth as Associate Judge of the State of Hawaii Intermediate Court of Appeals. He was officially sworn-in on October 21 when he began his term.

Wadsworth most recently served as Solicitor General of the State of Hawaii where he led the Appellate Division of the Department of the Attorney General. He has 34 years of litigation and dispute resolution experience, and has briefed and argued appeals before the Hawaii Supreme Court and the federal Ninth Circuit Court of Appeals.

He was appointed to the Hawaii Intermediate Court of Appeals by Gov. David Y. Ige to fill the vacancy created by the retirement of former Associate Judge Lawrence M. Reifurth in August 2019. The Hawaii State Senate confirmed Wadsworth’s appointment on September 17, 2019.