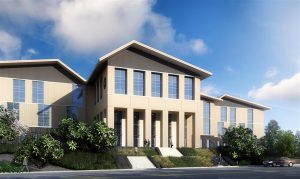 The Hawaii State Judiciary’s appropriations bill, which included $5.8 million to purchase equipment and furniture for the new Kona courthouse, passed final reading in the Senate and House of Representatives. The bill has been sent to Gov. David Ige for his review and consideration.

“On behalf of the Hawaii State Judiciary, I want to express my deep appreciation to the Hawaii State Legislature for approving the funding needed to outfit the new courthouse in Kona with equipment and furniture,” said Chief Justice Mark E. Recktenwald. “We are pleased to be able to give the West Hawaii community a full-service facility where they can take care of all court-related matters in a centralized, convenient, and secure environment.”

The facility is scheduled to open in late summer 2019. The legislature previously approved a total of $90 million for construction costs in the 2014 and 2015 sessions. Groundbreaking for the project was in October 2016.

“After years of conducting court business out of three separate locations, we are gratified that we will be better able to better serve the people of the west side by giving them the modern court facility they deserve,” said Third Circuit Chief Judge Greg Nakamura.

“The Kona community is looking forward to having a new courthouse, which will provide safety, efficiency and convenience that the existing three makeshift facilities cannot,” said Rep. Nicole Lowen. “Securing this funding was critical to ensuring the timely completion and opening of the Courthouse.”

“It was my honor to work hand-in-hand with the Chief Justice and the Judiciary to complete funding for this important project for the people of Kona,” said Sen. Josh Green. “This has been a priority for West Hawaii for a long time.”

The courthouse will be a three-story facility with five courtrooms, a law library and self-help center open to the community, conference rooms, holding cells, witness rooms, attorney interview rooms, and a grand jury meeting room. There will also be more than 250 parking stalls for the public.