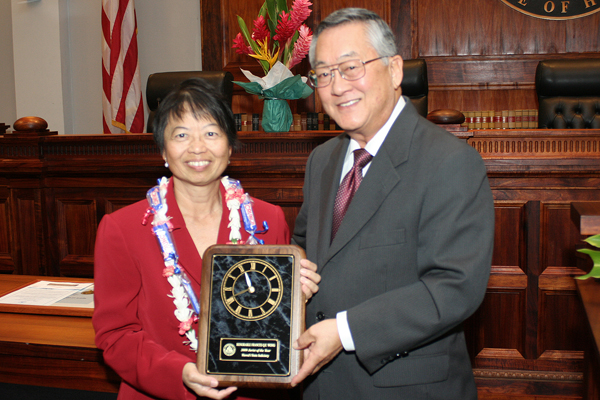 “For over 23 years, Judge Wong has distinguished herself as an outstanding jurist. She is well-known for her hard work and hands-on leadership style,” said Chief Justice Moon. “Whether the task at hand is tackling proposed rule amendments or juggling calendar assignments, you can always find her ‘in-the-trenches’ alongside her fellow judges and other judiciary employees.”

Judge Wong served two “tours of duty” as senior judge of the Family Court, totaling 11 years. The implementation of many progressive and effective programs and projects in the Family Court have been the direct result of her leadership, vision, and commitment to Hawaii’s children and families.

Also at yesterday’s ceremony and at ceremonies held on the Big Island, Maui and Kaua`i, several Judiciary employees were recognized for their outstanding contributions to the court system.

Receiving the Meritorious Service award was Gloria Yoshimoto of the Policy and Planning Department, Administration. This award recognizes employees who maintain a high level of excellence on the job.