The Hawai`i State Judiciary’s Volunteers in Public Service to the Courts program, aka VIPS, recognized and honored its Oahu-island volunteers at the organization’s Volunteer Recognition Ceremony held on August 7 in the Supreme Court courtroom.

“The work and support of our volunteers is always valued and appreciated, but even more so during these difficult economic times,” said Faith Matsuwaka, VIPS Program Manager. “When Judiciary resources have been reduced and budgets slashed, volunteers help fill in the gaps.”

Eight individuals who volunteered more than 500 hours during the past fiscal year were also honored during the ceremony. The names of the 500-hours or more honorees and their volunteer positions are:

For information on becoming a volunteer with the Hawai`i state court system on O`ahu, call 539-4880. 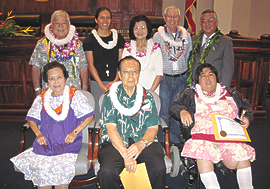