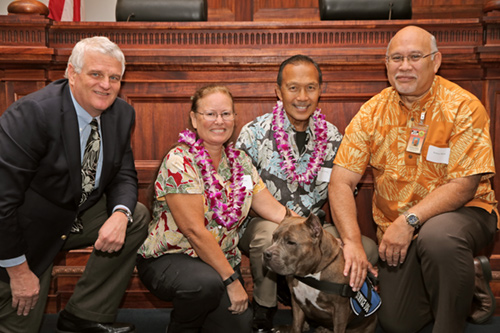 Chief Justice Mark Recktenwald (far left) and Administrative Director of the Courts Rodney Maile (far right) thank Deborah and Leonard Chong, and their therapy dog, Pohaku, for the many hours they spend providing support and comfort to participants in Oahu’s Veterans Treatment Court.

On September 29, the Hawaii State Judiciary celebrated the 46-year anniversary of its Volunteers in Public Service (VIPS) to the Courts Program by acknowledging the contributions of 1,224 Oahu participants at its annual Volunteer Recognition Ceremony. This is the fifth consecutive year that the program has had the support of more than 1,000 volunteers.

During the 2016-17 Fiscal Year, First Circuit (Oahu) volunteers contributed more than 55,000 hours of combined service, for a total estimated in-kind donation of $509,786 to the Hawaii State Judiciary.

Volunteers in the Judiciary’s VIPS Program provide support services for court operations throughout the First Circuit, from judges’ chambers, to court offices and programs such as the Court Appointed Special Advocate (CASA) Program, Kids First, the Children’s Justice Centers, and the Judiciary History Center.

“Over the past 46 years, our volunteers have become an integral part of the Judiciary’s operations,” said Administrative Director of the Courts Rodney Maile. “More than 20,000 volunteers have given their time and talents, contributing more than 14 million hours to serve the people of Hawaii by helping the Judiciary meet its mission of administering justice in an impartial, efficient and accessible manner in accordance with the law.”

For information on volunteer opportunities with the Hawaii state court system, visit the VIPS web page at: www.courts.state.hi.us/outreach/volunteer_opportunities, or call (808) 539-4880.