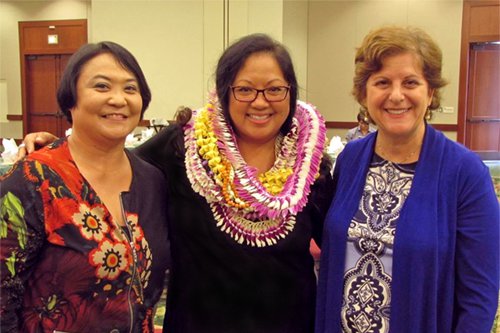 “The Golden Gavel Award recognizes outstanding service to the Judiciary, including activities relating to new or innovative projects regarding the Judiciary and services that promote the fair and efficient provision of justice. This year’s recipient, Ms. Debi Tulang-De Silva, was selected for the significant role she has played in developing a language access program that has greatly improved the quality of court services provided to persons with limited English proficiency,” said HSBA Board member and HSBA Awards Committee Co-Chair Nadine Ando.

In 2005, Ms. Debi Tulang-De Silva was hired as the Judiciary’s OEAC Director and tasked with developing an interpreter certification program for the Hawaii Judiciary. The program she developed has been a source of great pride for the Hawaii State Judiciary, and has served as a role model for other state courts seeking to develop interpreter certification programs. Building on that foundation, she developed and implemented a comprehensive language access program that provides free language services to court users.

In 2016, Hawaii was recognized by the National Center for Access to Justice as the leading state in the country for supporting people with limited English proficiency (LEP). Under Tulang-De Silva’s leadership, OEAC improved and increased the services available to Hawaii’s growing LEP population. The Judiciary annually provides interpreting services for LEP clients in as many as 45 different languages. OEAC also conducts statewide mandatory staff training on language access services for all Judiciary staff, so that the Judiciary can uphold the highest standard of service.

“For more than 10 years, Debi has worked tirelessly to ensure that programs and services are available so that language barriers do not impinge upon the process of justice,” said Susan Pang Gochros, Intergovernmental & Community Relations Director. “Countless court users have been the direct beneficiaries of Debi’s commitment to providing equal access to justice to people with limited English proficiency. She is a very worthy beneficiary of this esteemed award.”