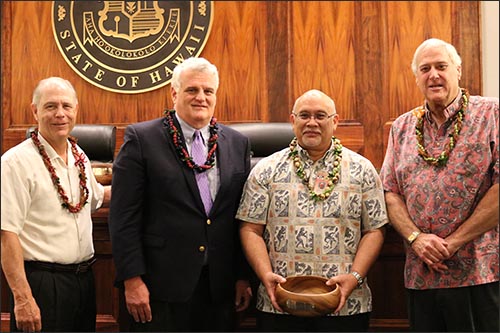 Chief Justice Mark Recktenwald presented Hawaii Justice Foundation (HJF) President, William S. Hunt, and Administrative Director of the Courts, Rodney Maile, with the Spirit of Justice Awards at the HJF 2016 Annual Meeting.  The award is given annually to individuals who have made a substantial contribution to access to justice.

William S. Hunt is the managing partner of Alston Hunt Floyd & Ing, which has litigated a number of significant pro bono cases over the years.  The Chief Justice also thanked him for his leadership on HJF’s board and his continued support of legal service providers.

Rodney Maile, the Administrative Director of the Courts, was recognized for his “untiring commitment to increasing access to justice,” which includes his work on projects such as establishing self-help centers in courthouses across the state, improving access for those with limited English proficiency, and cultivating key partnerships to expand the reach of the Access to Justice movement.

“Rod works quietly behind the scenes to bring people together,” said Chief Justice Mark Recktenwald.  “I am honored to present this award to someone whose work embodies the name of this award, and I thank him for his dedication and commitment to the Judiciary’s mission.”