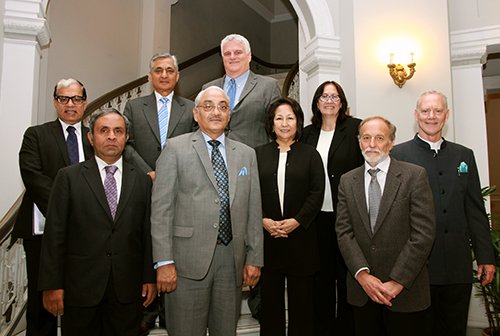 “This event today and the symposium at the law school tomorrow are auspicious occasions for the people of our two great nations,” said Chief Justice Recktenwald. “Opportunities like this help to make the world a more just and peaceful place, by fostering understanding of people from diverse backgrounds and strengthening our commitment to equal justice for all persons.”

The Chief Justice also thanked Dean Avi Soifer and Associate Dean Denise Antolini, from the William S. Richardson School of Law, who have been instrumental in planning for the events this week and in developing ties between the law school and colleagues and institutions in India.

This year’s India-Hawaii Law Symposium topics are: Environmental Rule of Law, Environmental Courts, Climate, and Constitutions. The symposium is open to the public and will also be taped and broadcast by Olelo and the Law School Information Technology Staff.