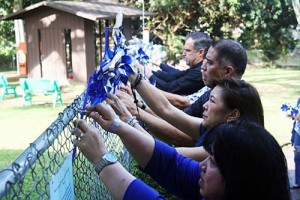 Children’s Justice Center (CJC) staff and partner agencies are pictured above hanging pinwheels in front of the CJC-Oahu on April 8, 2016 as part of Child Abuse Awareness and Prevention Month

The Children’s Justice Centers (CJC) across the state are participating in a variety of activities throughout April, in recognition of Child Abuse Awareness and Prevention Month.  Many of the events and activities were planned in conjunction with the Friends of the Children’s Justice Centers, Hawaii State Department of Health, City and County Mayors’ Offices, rotary clubs, and Prevent Child Abuse Hawaii.

In Hawaii, more than 50 percent of reported victims of crime are under 18 years of age.  Research shows that one in four girls and one in six boys will be sexually assaulted by the time they are 18.  On average, the CJC’s see approximately 1,000 children per year; most are alleged victims of sexual assault, but the Centers also serve children who are seriously physically abused and those who are witnesses to crime.  However, these statistics are not a true reflection of the magnitude of the problem as child sex abuse often goes unreported. Some studies conclude that only 10 percent of children “tell.”

“We are here to help and provide justice for children,” said Jasmine Mau Mukai, Director of the Children’s Justice Centers.  “Many people who drive past our Centers can often mistake them for a house, but our intention is to provide a warm, homelike setting where children can feel as comfortable as possible to reduce the trauma of speaking out.”

Children who witness crimes or are alleged victims of abuse can go to a Center and meet with multidisciplinary team of professionals who coordinate these investigations.  The CJC’s are programs of the Hawaii State Judiciary.  Since 1988, when the first CJC opened, more than 30,000 children have been served in Hawaii.

A unique feature of the Centers is the public/private partnerships between the Judiciary and the community. Founded by local Rotary Clubs, each neighbor island Center is supported by their Friends of the Children’s Justice Center, a nonprofit organization that provides resources for the Centers, the professionals who work with victims, and the children and families served by the programs.

In addition to displaying pinwheels, which serve as a reminder of Child Abuse Awareness and Prevention Month, here is a list of some additional upcoming activities the Centers statewide are participating in: