HONOLULU, HI – Attorneys who volunteered their time without compensation to non-profit legal services providers and self-represented litigants were honored at the Hawaii Access to Justice Commission’s 2015 Pro Bono Celebration on October 29. The Commission also presented awards of $500 each to the six award recipients from its 2015 high school essay contest titled, “How to Inspire Fellow Students to Volunteer.”

As events were held around the country in observance of National Pro Bono Week, nearly 150 people gathered in the Hawaii Supreme Court courtroom to celebrate the outstanding pro bono attorneys who assisted non-profit legal services providers, and the volunteer attorneys who helped staff the Access to Justice Rooms at Honolulu District Court and the Ronald T.Y. Moon Kapolei Family Court.  Since opening in 2012, Oahu’s two Access to Justice Rooms have had more than 3,167 visits by self-represented litigants, with volunteer attorneys providing over 1,900 hours of free legal assistance. 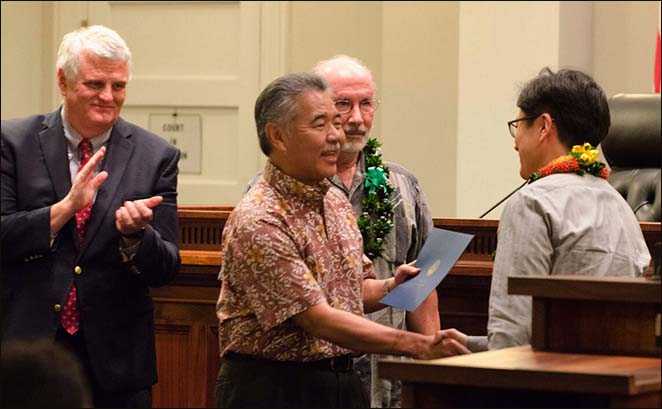 “There is a growing number of people who cannot afford representation in civil legal cases, which poses a significant problem for our justice system, both nationally and in Hawaii,” said Chief Justice Mark Recktenwald.  “For this reason, I am grateful to the many attorneys who have volunteered their time and talents to those in our community who need it the most.  These attorneys are helping us to uphold our mission of providing justice for all.”

The attorneys and law firms that were recognized for their pro bono service at the Honolulu District Court and the Kapolei Family Court Access to Justice Rooms in 2015 were:

In addition to acknowledging the volunteer attorneys, the award recipients from the Access to Justice Commission’s 2015 statewide student essay contest were praised for their work.

“When I read each of the essays, it renewed my faith in the next generation of leaders.  I want to thank each student for participating in this essay contest and also their teachers and families for their support of these outstanding students,” said Intermediate Court of Appeals Associate Judge Daniel R. Foley, who also serves as the Chair of the Hawaii Access to Justice Commission.