The Hawaii Veterans Treatment Court of the First Circuit (Oahu) celebrated its second graduating class on Friday, October 23, 2015.  The Hawaii State Supreme Court courtroom was filled with supporters of the five U.S. veterans who completed the intensive two-year program.

Ten veterans have now successfully completed the First Circuit program since it was initiated three years ago.  The Hawaii Veterans Treatment Court continues to grow, on both Oahu and Hawaii Island (Third Circuit), as an increasing number of attorneys submit applications for their clients to participate in the program. The defendants selected to participate in Veterans Treatment Court are military members who served our country, and later experienced adjustment difficulties. Many have mental health issues, including post-traumatic stress disorder, and the majority also struggle with substance abuse.

The Veterans Treatment Court takes a holistic approach to help provide the resources and treatment these veterans need to get healthy, get employed, and return to being law-abiding citizens so they may enjoy the freedoms they fought to protect.  Each veteran has undergone extensive treatment and counseling, which includes frequent urinalysis, meetings with probation officers, and court appearances.  Many services rendered to these veterans were provided by the U.S. Department of Veterans Affairs (VA) at no cost to the state of Hawaii.

“I’d also like to acknowledge the staff from the U.S. Vets and Sand Island Treatment Center for their role in Veterans Treatment Court,” said Judge Edward Kubo.  “Another integral part of this program’s success are the volunteer veteran mentors, who have an understanding of the difficulties these men and women are facing and walk alongside them throughout the process of recovery.”

Each graduate has also been assisted with finding housing and employment. Their graduation celebrates their success in achieving a clean and sober lifestyle and a chance for a successful future with a job and other opportunities. 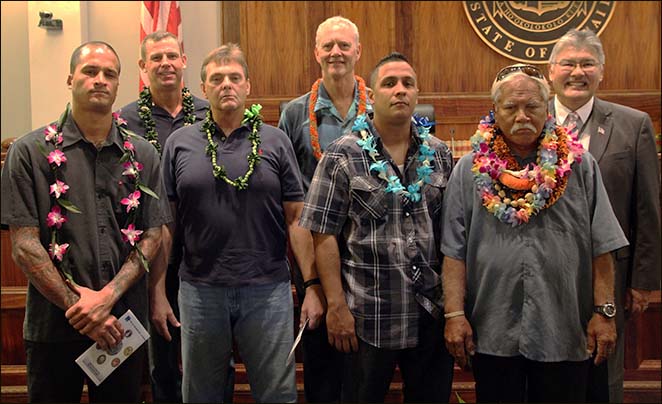