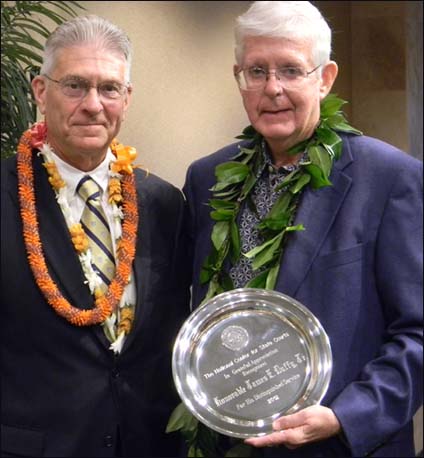 Williamsburg, Va. (September 30, 2013) – James E. Duffy, Jr., former associate justice of the Hawai`i Supreme Court, is the recipient of the National Center for State Courts’ Distinguished Service Award, one of the highest awards presented by the organization. The Distinguished Service Award is presented annually to those who have made significant contributions to the justice system and who have supported the mission of the NCSC. The award was presented to Justice Duffy on September 27, 2013, during the Hawai`i State Bar Association’s convention.

“Justice Duffy has been a tireless advocate for the legal profession and for the people of Hawai’i. His commitment to continuing legal education has made great strides in strengthening the profession and improving the public’s trust and confidence in the courts,” NCSC President Mary McQueen said.

During Justice Duffy’s tenure, the Hawai`i Supreme Court’s Commission on Professionalism successfully promoted legal education by advocating the establishment of a mandatory continuing legal education requirement for state bar members. Duffy also led the development of guidelines for Professional Courtesy and Civility for Hawai`i Lawyers, and produced an educational video called “Tips from the Bench and Bar: The Do’s and Don’ts in Hawaii Appellate Practice.”

Chief Justice Mark E. Recktenwald of the Hawai`i Supreme Court states that Justice Duffy’s “brilliant and distinguished career has been marked by a commitment to legal excellence, professionalism, legal education and civility.”

Justice Duffy began his career in private practice in 1968 upon graduating from Marquette University Law School in Milwaukee, Wisconsin. He was first appointed to the court in June 2003.

Justice Duffy has served as co-chair of the Judiciary’s Strategic Planning Committee; President of the Hawai`i State Bar Association; and as a member of the American College of Trial Lawyers, the American Board of Trial Advocates and the American Inns of Court.

Justice Duffy received the Lifetime Achievement Award from both the Hawai`i State Bar Association and the Consumer Lawyers of Hawai`i, as well as the John S. Edmunds Award.

The National Center for State Courts, headquartered in Williamsburg, Va., is a nonprofit court reform organization dedicated to improving the administration of justice by providing leadership and service to the state courts. Founded in 1971 by the Conference of Chief Justices and Chief Justice of the United States Warren E. Burger, NCSC provides education, training, technology, management, and research services to the nation’s state courts.