Each May, National Drug Court Month recognizes both Drug Court professionals and the program participants whose hard work and perseverance bring many important benefits to our communities. This year, the Big Island Drug Court (BIDC) is also celebrating 20 years of success stories, especially those of reclaimed lives and reunited families.

The Hilo Drug Court celebrated five graduates at the Big Island Drug Court’s 61st Graduation Ceremony on May 12. Drug Court Judge Peter Kubota commended them on their new life skills and achievements. Drug Court team members and staff also took the opportunity to acknowledge the graduates for their commitment to a better future. 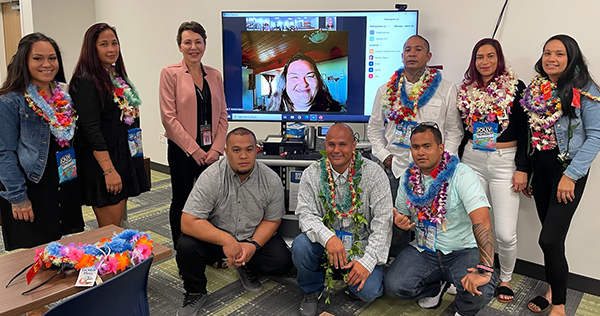 Kona Drug Court Judge Wendy DeWeese (third from left) and the nine graduates (one on Zoom) celebrate at the May 16 ceremony.

Nine more graduates were honored for their life-changing achievements at the Kona Drug Court graduation ceremony a few days later. Judge Wendy DeWeese congratulated the group on their many successes through the 18-month intensive treatment program.

By providing a pathway out of the criminal-justice system to long-term recovery, Drug Court and other treatment court programs have played a significant role in Hawaii’s ability to address many of the social challenges related to substance use and mental illness, while saving taxpayer dollars on the costs of incarceration.

Since 2002, more than 350 men and women have completed the BIDC program. Approximately 90 percent have remained conviction-free of felony offenses for at least three years after graduation.