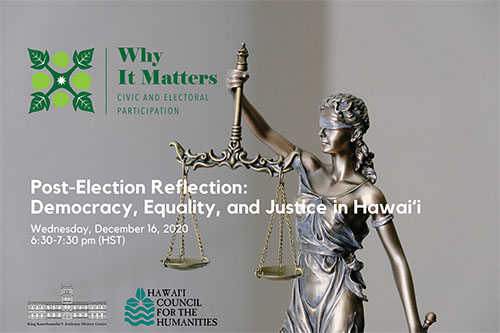 Join us in conversation as we reflect on the civic weight of this year and the ideals of democracy, equality, and justice. Recalling a global pandemic and its far-reaching impacts, the murders of George Floyd, Breonna Taylor, and Ahmaud Arbery, widespread marches against racism, and calls for change in our own community—this discussion will ask:

•  What can or should justice look like?
•  What impact do elections have on the justice system?
•  How is Hawaii approaching criminal justice reform?
•  What is the difference between “equity” and “equality”?

Join our panelists, Carrie Ann Shirota, Mark Patterson, and Julia Morgan, as they share their insights about criminal law, public policy, and moral philosophy in an open discussion about justice and equity.

Space is limited to 100 attendees. If the webinar reaches capacity, please visit our Youtube channel at www.youtube.com/jhchawaii to view the program live on December 16, 2020 at 6:30 pm. The webinar will be recorded and published for later viewing.

Mahalo to the Hawaii State Bar Association’s Civic Education Committee for sponsoring this program. This program is part of the “Why it Matters: Civic and Electoral Participation” initiative, administered by the Federation of State Humanities Councils, funded by Andrew W. Mellon Foundation, and created in partnership with the Hawaii Council for the Humanities.

Carrie Ann Shirota is an attorney who currently works on civil rights issues for the federal government. She previously served as the Director for Maui Economic Opportunity’s BEST (Being Empowered and Safe Together) Reintegration Program that provides comprehensive reentry services for returning community members exiting our jails and prisons. She has also worked for the Hawaii Civil Rights Commission, Office of the Public Defenders, Parents and Children Together, and as a Faculty Counselor and Lecturer at the University of Hawaii Maui College. Born and raised on Maui, Carrie Ann is a proud graduate of Baldwin High School, Santa Clara University in California, and the William S. Richardson School of Law at UH Manoa.

Julia Morgan is an Instructor of Philosophy and Religion at Kauai Community College. She has a PhD in Philosophy from UH Manoa, with a specialization in ethics and Legal, Social, and Political Philosophy, a JD from the George Washington University Law School, and lots of student loans.

Mark Patterson is the current Administrator of the Hawaii Youth Correctional Facility. In 2019, he was appointed by the Office of Hawaiian Affairs to sit on the newly formed Hawaii Correctional System Oversight Commission, which he currently chairs. Mark was the former Warden of Hawaii’s Women Community Correctional Center where he was known for his Trauma Informed Care Initiative. He began his career as an adult correctional officer working with incarcerated men for over twenty years for the Department of Prisons Southern Nevada and Department of Public Safety State of Hawaii. Mark holds an Associate Degree from New Mexico Military Institute and a Bachelor’s in Criminology from Florida State University.