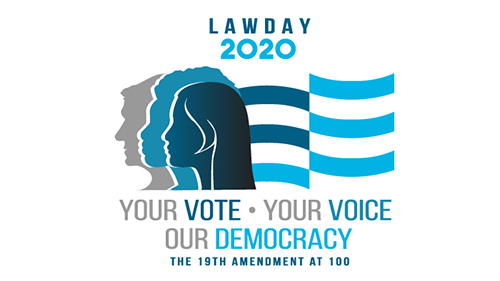 The COVID-19 pandemic has altered the observance of traditional Law Day celebrations this year, so the Hawaii Supreme Court Law Library has moved the commemoration online. The staff has created a celebration page featuring articles and presentations on the women of the suffrage movement, including Hawaii’s own suffrage pioneer Wilhelmina Kekelaokalaninui Widemann Dowsett.

The national women’s voting rights movement began in 1848 at the Seneca Falls Convention. In the following decades, activists across America pursued these rights with parades, silent vigils, hunger strikes, and even in the courts where male-only voting laws were challenged.

The ratification of the 19th Amendment on August 20, 1920, was the culmination of a 72-year, multi-generational effort. Law Day 2020 commemorates the importance of this achievement with the theme “Your Vote, Your Voice, Our Democracy: The 19th Amendment at 100.”

This year also marks the 150th anniversary of the ratification of the 15th Amendment, which prohibited denial of the right to vote based on race, color, or previous condition of servitude.

Both the 15th and 19th Amendments brought America closer to a more complete realization of the democratic ideals upon which our country is founded, ideals which will be upheld once again with the 2020 elections.

About Law Day
Law Day is an annual event, which was originally conceived in 1957 when American Bar Association President Charles Rhynes envisioned a special national day to mark our commitment to the rule of law. The following year, President Dwight D. Eisenhower established the first Law Day. Law Day was made official in 1961 when Congress issued a joint resolution designating May 1 as the official date for celebrating Law Day.